The Democratic Party is in big, big trouble... - The Horn News 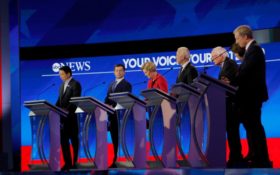 While Republican lawsuits around the country are accusing Democrats of rigging the election, there’s another lie the GOP should expose once and for all: The Republicans, not the Democrats, are now the party of average voters. Even though it still bills itself as the “party of the little guy,” the Democrats have slowly turned into the party of the super-rich, the celebrities, and Silicon Valley tech giants.

On the eve of the 2020 election, Democrats controlled 26 of the 27 wealthiest congressional districts. From the wealthy suburbs of Wall Street and Washington, D.C., to San Francisco’s Bay, rich with tech stocks, Democrats hold all the cards.

The Democrats have stopped being the party of factory workers and farmers and become the party of trial lawyers, government workers, and the elites in every town.

The polls help tell the story. “In 1994, 39% of those with a four-year college degree (no postgraduate experience) identified with or leaned toward the Democratic Party and 54% associated with the Republican Party,” according to a Pew Research poll. “In 2017, those figures were exactly reversed

Republicans have won over people who didn’t go to college at all—for years, the heart of FDR’s Democratic Party—too. In the late 1990s through the early 2000s, Democrats held a five-point lead among people without a college education. But in 2020, Donald Trump won that group by eight points.

Even though the head of the GOP is a billionaire, Donald Trump’s favorite meal is McDonald’s—while Joe Biden’s favorite toy is his 1967 Corvette convertible. Republicans talk about working class issues: crime, paying your bills, keeping our country strong. Democrats have campaigned on things like defunding the police, raising taxes, and calling a boy using the girl’s locker room a “civil right.” Ordinary people don’t see themselves served in that.

The best description of this decades-long change came from Sen. Ted Cruz, R-Tex.

“At the same time,” he continued, “we’re seeing suburban voters and, in many cases, suburban women, moving left. And that’s moving big suburban states like Arizona, like Texas, like Georgia.” That voting swing and the population influx from liberal states to the South teamed up to turn the sun belt “more purple” in 2020.

Democrats and their allies, from Hillary Clinton to Rick Wilson to Peter Strzok, have gotten a kick out of humiliating Trump’s supporters by calling them “deplorables,” or making fun of their accents, or laughing about the fact that they have to shop at Walmart. But at least a few Democrats think the party is losing its way.

One of them is Bill Maher, the host of HBO’s Real Time, who let his party have it in a scathing video clip this weekend.

“Democrats too often don’t come across as having common sense to a huge swath of Americans,” he said.

The working class keeps telling the elite Democratic Party that “our primary purpose for voting for (Trump) is to create a bulwark against you. Because your side thinks silence is violence and looting is not.”

Other Democrats also wish their party did a better job of caring for the poor instead of the Woke.

“Working class white people have come to see the (conservative) movement as their champion,” wrote Martin Longman at the liberal magazine the Washington Monthly. “I don’t see this as a positive development. I don’t want to see the left abandon the little guy (regardless or race or religion) or see the little guy abandon the left.”

At the same time, a figurehead at one of the most elite institutions in America is giving the Republicans some free advice: Stick with the lower-income voters who put your candidate in the White House.

“The working class is the heart of the Republican Party,” wrote New York Times columnist David Brooks. “The party needs to stop catering to the corporate class and start focusing on the shop owners, the plumbers, the salaried workers.”

If the GOP embraces the voters the Democrats have cast aside, they could form an unbeatable coalition.