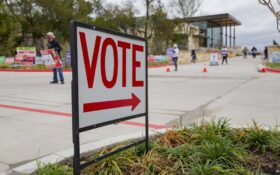 A tumultuous election season comes to a close on Tuesday as voters cast ballots in the first national election of Joe Biden’s presidency.

With polls open, Democrats were braced for disappointing results, anxious that their grip on the U.S. House may be slipping and that their hold on the U.S. Senate — once seen as more secure — may be lost as well. The party’s incumbent governors in places like Wisconsin, Michigan and Nevada are also staring down serious Republican challengers.

Returning to the White House on Monday night after his final campaign event, Biden said he thought Democrats would keep the Senate but acknowledged “the House is tougher.”

The GOP was optimistic about its prospects, betting that messaging focused on the economy, gas prices and crime will resonate with voters at a time of soaring inflation and rising violence. Ultimately, they’re confident that outrage stemming from the Supreme Court’s decision to eliminate a woman’s constitutional right to an abortion has faded and that the midterms have become a more traditional assessment of the president’s performance.

“It will be a referendum on the incompetence of this administration,” Minnesota Republican Rep. Tom Emmer, who’s running the GOP effort to retake the House, said of the election.

According to “Sabato’s Crystal Ball” — the University of Virginia’s Center for Politics predictions run by election handicapper Larry Sabato’s team — it will be a modest win in the Senate for the GOP.

“Republicans are at least small favorites in the Senate, and so we wanted to get them to at least 51 in our ratings,” the Center for Politics predicted.

“Georgia and Pennsylvania, in addition to the other Republican-leaning races that we are not changing, is the path we’ve chosen, based on our best intel. And, to be honest, we think it’s probably likelier that Republicans get over 51 than Democrats stay at 50 and preserve their majority.”

The forecast has the House of Representatives swinging even stronger to Republican control.

“The Republicans’ surprisingly robust performance in the 2020 election, in which they won 213 seats, took a lot of the drama out of the race for the majority in 2022. By getting to within 5 seats of the speakership a couple of years ago, Republicans made it so that there was never much significant doubt about the House in 2022, given the way midterms often go for the party that holds the White House,” Sabato and his team wrote.

“Yes, there were the ups and downs of redistricting, as well as the back-and-forth of the election cycle, particularly in the late summer, when Democrats enjoyed a string of good showings in a series of special elections,” the “Crystal Ball” said. “But Democrats never truly seemed to be in serious contention to hold the House — the amount of defense they have had to play is just too daunting, and they have been hampered by a number of open seats. A considerable number of them are in the Leans Republican column now.”

The results could have a huge impact on the final two years of Biden’s presidency. Republican control of even one chamber of Congress would leave Biden vulnerable to a slew of investigations into his families controversial international business dealings.

If Republicans have an especially strong election, pressure could build for Biden to opt against reelection in 2024.

Former President Donald Trump is expected to capitalize on Republican gains by formally launching another bid for the White House during a “very big announcement” on Nov. 15. Insiders hinted that an announcement may have happened Monday, but Trump defied expectations.

Only 43% of U.S. adults said they approved of how Biden is handling his job as president, according to an October poll by The Associated Press-NORC Center for Public Affairs Research. In the same poll, just 25% said the country is headed in the right direction.