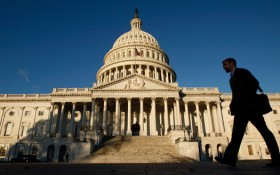 Congress is racing to avert a government shutdown next week when the budget year ends and a temporary funding bill is required to keep agencies operating.

But the once-routine job of passing a stopgap measure known as a continuing resolution has been drawn into a battle over Planned Parenthood and its involvement in the practice of procuring tissue from aborted fetuses for research purposes.

Some conservatives want to use the must-pass funding bill — and the threat of a government shutdown if it doesn’t pass — to try to take away taxpayer funding of Planned Parenthood, which receives about $500 million a year from the government for providing health services at almost 700 clinics across the country.

The idea is reminiscent of a failed attempt by Republicans two years ago to use a must-pass measure to try to block implementation of the health care law. That showdown led to a 16-day partial shutdown that GOP leaders are keen to avoid this time, especially as the presidential campaign draws closer. Hanging over it all is the weakened political standing of House Speaker John Boehner, R-Ohio, who is under fire from some tea party conservatives who say he is not tough enough in battling President Barack Obama.

WHY IS A STOPGAP FUNDING BILL NEEDED?

Congress has failed to pass a single one of the 12 annual appropriation bills, which are caught in a stand-off between Democrats and Republicans over the amount of spending. So, with the new fiscal year beginning Oct. 1, a stopgap bill is needed for the daily operating budgets of almost every federal agency. Such measures used to be routine but have become more challenging since tea party lawmakers began viewing them as potential vehicles for challenging Obama.

Usually the House passes the stopgap measure first, but GOP leaders appear skittish of angering tea party forces. So Majority Leader Mitch McConnell, R-Ky. — after a failed attempt to break a Democratic filibuster of a stopgap measure that would also cut off Planned Parenthood’s federal funds — appears ready to move a second one through the Senate this week or next that’s free of the controversy.

“We have to push forward — and we will,” McConnell said Monday.

The idea is that the House would have no option other than to pass the measure or spark a shutdown that the great majority of Republicans fear could harm the party.

IF THERE’S A SHUTDOWN, DOES PLANNED PARENTHOOD LOSE ITS MONEY?

No. Medicaid funding, which accounts for the great majority of Planned Parenthood’s federal funding, would go ahead.

WHAT HAPPENS IF THERE’S A SHUTDOWN?

Actually, the government doesn’t shut down, at least not the essential parts. So while national parks and Smithsonian museums will shutter, the military, airport security, FBI agents and the Border Patrol will remain on duty. And benefit programs including Social Security, Medicare, food stamps and Medicaid (including payments to Planned Parenthood for services to the poor) will continue on autopilot. However, an extended closure would cause federal workers to see delays in getting paid.

WHAT IS PLANNED PARENTHOOD ACCUSED OF?

Anti-abortion lawmakers have gone after Planned Parenthood’s funding for years, but the debate has intensified in recent weeks after the release of videos that have focused attention on the group’s practice of providing fetal tissue to researchers.

The Center for Medical Progress, which recorded the hidden camera videos, accuses Planned Parenthood of profiting from selling fetal organs. That would violate a federal criminal statute that lets providers recover only their expenses. They also say Planned Parenthood is altering abortion procedures to better recover usable tissue.

Planned Parenthood has apologized for comments in the videos but claims it has broken no laws.

A shutdown would almost certainly be avoided if House leaders like Boehner were to call for a vote on a traditional funding bill that’s free of the Planned Parenthood dispute. Democrats would help pass such a measure, and some in Congress think that’ll be the last-minute outcome, especially if the Senate passes one first. But Boehner is plainly skittish — he would have otherwise advanced a stopgap measure by now — so one can’t be sure.