The comeback begins: Trump set to destroy Cruz in NH - The Horn News 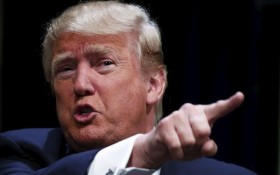 After his recent victory in the Iowa caucuses, Texas Sen. Ted Cruz’s staff popped champagne and celebrated on a private jet to New Hampshire.

But it looks like it will be billionaire Donald Trump who drinks bubbly after the Granite State votes February 9.

That’s according to a tracking poll of New Hampshire voters released this week and supported by researchers at UMass Lowell.

It shows Trump commanding what many consider an insurmountable 24-point lead over his closet rival, Cruz. According to the poll, Trump has 38 percent of support among likely voters, compared to 14 percent for Cruz. Florida Sen. Marco Rubio had 12 percent, according to the poll.

Despite the huge lead, Trump remains on the attack.  On his official Twitter account Wednesday, Trump accused Cruz of fraud in Iowa, based on allegations that the Cruz campaign spread rumors that Dr. Ben Carson was dropping out of the race.

Trump tweeted earlier: “Ted Cruz didn’t win Iowa, he stole it. That is why all of the polls were so wrong and why he got far more votes than anticipated.”

Trump also pointed to a mailer sent by the Cruz campaign that was headlined “voting violation” and resembled an official notice. The mailer showed recipients their history of voting or not in past caucuses, along with the turnout record of their neighbors, and drew complaints from Iowa’s secretary of state.

Officials from the Iowa Republican Party did not respond immediately to questions about their process for handling complaints like Trump’s.

And while Trump remains miffed about Cruz’s Iowa win, it looks like the billionaire should have some good news coming in just days. And while primary polls can be unreliable, a 24-point lead evaporating seems highly unlikely.