The blockbuster that could DESTROY Hillary’s campaign - The Horn News 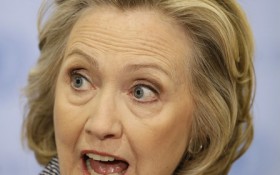 Democratic presidential candidate Hillary Clinton is falling in the polls behind Vermont senator Bernie Sanders and continues to struggle with her ongoing email scandal.

And this weekend could bring a bombshell to her presidential hopes that no one at the Clinton campaign wants to talk about.

The Hollywood film “13 hours: The Secret Soldiers of Benghazi,” is set to be released Friday and will dramatize first-person accounts of what happened during Islamic extremists’ fateful attack on two diplomatic outposts in Benghazi, Libya on September 11, 2012.

Then-Secretary of State Clinton has long been criticized for her actions during and after the attacks. The release of the film, set just weeks before the all-important Iowa caucuses, couldn’t come at a worse time for Clinton.

Voters heading to early primaries will be reminded that Clinton was in charge of the State Department during the Benghazi disaster, that her inaction likely cost lives, and that she tried to blame the attacks on a YouTube video rather than recognizing them as a terror plot.

Even worse for Clinton: the movie’s director, Michael Bay, is not the typical liberal elitist we are used to seeing in Hollywood. Bay has frequently worked alongside producer Jerry Bruckheimer, one of Hollywood’s top conservatives.

Bay has insisted his movie focuses only on the facts around the Benghazi incident. Unfortunately for Clinton, the facts do not reflect well for her.

After months with a comfortable edge in most Iowa polls, Clinton finds herself battling an underdog rival in a state that has a history of rewarding anti-establishment campaigns. Recent polls have Clinton in a statistical dead heat with Sanders in Iowa, and trailing Sanders in New Hampshire.

And while Clinton has worked diligently to shift her campaign’s conversation away from her role in the Benghazi attacks, voters are about to get a powerful reminder. Her campaign can ill afford a huge blockbuster movie reminding voters of Clinton’s failings.