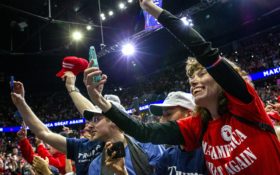 The only ones happier about the 2020 presidential election than the Democrats are the people in the Republican establishment.

They think that this election means they’ve gotten rid of President Donald Trump forever, and now they can have “their” party back. They’re already dreaming up the future of a post-Trump Republican Party.

Donald Trump isn’t going away — and neither are the 73-plus million Americans who voted for him, or the tens of thousands who show up any time just to hear him speak.

Make no mistake: If he’s alive and well, Donald Trump will run for president in 2024.

Here are a few reasons why Trump won’t just go away.

1. He’s the only national figure the GOP has.

Like it or not, the Republican Party is Trump’s party now. Every major GOP figure they could try to use as an alternative has already tried to destroy Trump, and has failed miserably. Mitt Romney called him “a phony and a fraud” in the 2016 primaries and Trump won, anyway. Marco Rubio ran an insult-based campaign in 2016 that questioned the size of Trump’s… hands. Former South Carolina Governor Nikki Haley, a Deep State favorite to run for president in 2024, once said that Trump is “everything a governor doesn’t want in a president.”

These people are the best the GOP establishment hас. Оther than Romney, most Americans don’t even know their names.

Trump’s opponents are the old GOP, running on old ideas that never had any popular support outside a few board rooms, country clubs, and yacht decks.

Donald Trump is the only Republican since Pat Buchanan to talk about the factory worker, the minimum-wage employee and people who have lost a loved one to opioid addiction. And he became the first Republican to win the industrial Upper Midwest in more than 30 years. No one else in the Republican limelight can come close.

Whatever Bill Barr or the ongoing congressional investigations may decide, Donald Trump has it in his mind that the 2020 election was rigged. Based off the evidence his legal team produced, Trump is convinced that the American people had their votes erased by voter fraud. Under relatively normal conditions (not amid a global pandemic), Trump knows he can beat Biden with certainty, and he wants another chance to prove it.

3. He wants the rest of his first term

Despite his historic 2016 win, the Deep State managed to take away years of Donald Trump’s presidency. First, inside actors like Peter Strzok and his mistress Lisa Page unleashed the Russia hoax. Then, former Republican House Speaker Paul Ryan slow-walked Trump’s agenda through Congress. The late Sen. John McCain voted against repealing Obamacare… even though he campaigned on repealing it for years. Finally, House Speaker Nancy Pelosi tried to impeach him over a run-of-the-mill phone call with a foreign leader. It’s been four years of “#Resistance!” that turned his four-year term into about two years. This time, he wants to get his agenda passed in the first 100 days and finish the job the American people elected him to do in 2016.

4. A Biden-Harris first term will be a disaster, and he knows he can win.

How quickly we forget that America was in big trouble before Donald Trump’s election. Barack Obama, who couldn’t stop groveling to hostile countries, had a worse economy than anytime since the Great Depression. When riots broke out, he whipped them up and sided against the police. Biden promises to deliver more of the same. He’s out-of-touch, and Kamala Harris is so liberal and unlikable that America won’t be able to get rid of them fast enough. Trump understands this may be an opportunity by the time 2024 comes rolling around.

More than any politician in decades, Donald Trump has a personal bond with his voters. That’s why he holds huge rallies: to get as close to the people as possible. He likes the voters most politicians couldn’t be bothered to talk to and he knows his voters love him, too. He has a higher approval rating among Republicans than anyone in modern history. He knows you trusted him to do so much more than the Democrats, the Deep State, and the dunces in his own party would let him. He wants to put them out of a job and keep you in one. He’s ready to keep fighting for you for the rest of his presidency …and 2024 will be the next round.

The GOP establishment may hate Trump and his voters. But the Republican Party is Trump’s party now. He — and his millions of voters, voters you can’t possibly win without — aren’t going anywhere. Get used to it.