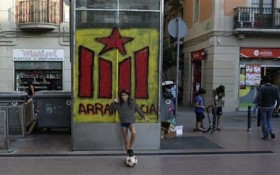 Europe as we know it could change very quickly.  In the north-east region of the Spain, a new generation is trying to kick off a 21st century “civil war” in Europe by rallying in huge numbers for secession from Spain.  The area is called Catalonia.  And they want to be their own country.

For a fourth consecutive year, hundreds of thousands of pro-independence Catalans are gearing up to rally Friday, kicking off a fresh secession bid in a push to carve out a new European nation.

After the central government rejected efforts by separatists to hold an independence referendum, Catalan politicians are now heading toward a Sept. 27 regional parliamentary election with candidates staking out positions for or against an independent Catalonia. The northeastern region of 7.5 million people is marked by fierce pride in Catalan language and traditions.

The massive rally for the Catalan National Day holiday on Sept. 11 marks the kickoff of campaigning for secessionists who say Catalonia is culturally different from Spain, doesn’t get back what it pays in taxes — and that independence is the only way forward. The latest effort follows rebukes to requests for greater self-governance by the Madrid central government.

The protest also starts an end-game for the independence drive because the election results will determine whether the region embarks on an 18-month “path to independence” or puts its secession aspirations on hold. Madrid has vowed to block any formal secessionist process.

Pro-independence parties need to win at least 68 seats in the 135-member regional parliament to push their effort forward, and polls show they’re on track to win a slim majority.

“If there is a clear result for the ‘Yes,’ it would be a very powerful message that Catalans want to move toward a Catalan state,” said Artur Mas, Catalonia’s regional president and the top-ranking politician in the secessionist camp, which includes parties from across the political spectrum.

A separatist electoral victory for Catalan separatists could cause a ripple around Europe, jump starting secession sentiment in areas of Europe where it has waned or lies largely dormant like Spain’s Basque region, Flemish-speaking Belgium, and Northern Italy.