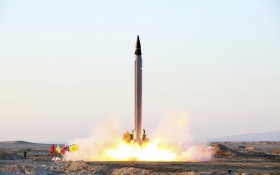 Iran successfully test fired a new guided long-range ballistic surface-to-surface missile, state TV reported on Sunday. It was the first such a test since Iran and world powers reach a historical nuclear deal.

He said the missile, named Emad or “pillar” in Farsi, was a technological achievement for Iran — able to be controlled until the moment of impact and to hit targets “with high precision.”

The channel showed footage of the huge missile being launched in a desert area, but it did not elaborate on the range of the missile or the specifics of the test firing.

This is the first test of a ballistic surface-to-surface missile by Iran since U.N. Security Council Resolution 2231 in July, which endorsed a landmark nuclear deal reached between Iran and world powers.

The Islamic Republic already claims to have surface-to-surface missiles with a range of 2,000 kilometers (1,250 miles) that can hit Israel and U.S. military bases in the region.