Texas to Obama: We won't be bullied - The Horn News 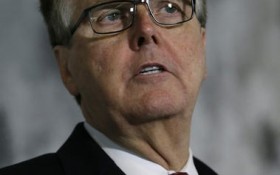 Texas’ lieutenant governor said Friday that the state isn’t going to be bullied, and is prepared to forfeit billions of federal dollars in public school funding in defiance of an Obama administration directive requiring schools to allow transgender students to use whatever bathrooms and locker rooms they choose.

The new directive is expected to worsen tensions between Republican-led statehouses and the federal government over divisive social issues. It clarifies expectations for districts receiving federal school funds, which Texas’ powerful Republican lieutenant governor argues the state’s 5.2 million public school students can now do without.

“We will not be blackmailed by the president’s 30 pieces of silver,” Lt. Gov. Dan Patrick said. “The people of Texas and the Legislature will find a way to find as much of that money as we can if we are forced to.”

The risk of losing federal school funds alarmed others.

Texas’ attorney general suggested that the guidelines would result in “yet another legal fight” over transgender bathroom access. Just this week, Texas joined a lawsuit in Virginia over transgender students using the bathrooms of their choice and signaled that the Fort Worth school district, which is Texas’ sixth-largest, illegally adopted policies recently that give the district latitude to not tell parents information shared by their transgender children.

U.S. Attorney General Loretta Lynch was sending the directive Friday to school districts. Some told her not to bother.

“When I get that letter I’ll throw it away,” Rodney Cavness, the superintendent of the small Port Neches-Groves school district in southeastern Texas, told Beaumont television station KFDM.

Under the guidance, schools have been told that they must treat transgender students according to their chosen gender identity as soon as a parent or guardian notifies the district that that identity “differs from previous representations or records.” There is no obligation for a student to present a specific medical diagnosis or identification documents that reflect his or her gender identity, and equal access must be given to transgender students even in instances when it makes others uncomfortable, according to the directive.