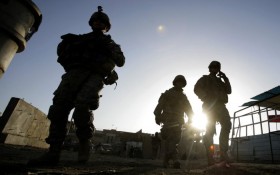 A desperate hunt is underway for three Americans civilians, who were reportedly kidnapped this weekend by men many believe connected to terrorists in Baghdad.

The official spoke on condition of anonymity as he was not authorized to brief the press.

A local policeman in Dora said the individuals were taken from their car on Saturday along a highway in southwest Dora while driving to Baghdad International Airport. The two differing accounts of the events could not immediately be reconciled. The policeman spoke on condition of anonymity as he was not authorized to brief the press.

The U.S. Embassy confirmed Sunday that “several” Americans have gone missing in Iraq, after local media reported that three Americans had been kidnapped in the Iraqi capital.

U.S. Embassy spokesman Scott Bolz said, “We are working in full cooperation with Iraqi authorities to locate the missing Americans.”

Bolz did not identify the missing Americans or say what they were doing in Iraq.

State Department spokesman John Kirby said that “due to privacy considerations” he had nothing further to add about the missing Americans. “The safety and security of Americans abroad is our highest priority,” Kirby said.

Col. Steve Warren, the Baghdad based spokesman for the U.S.-led coalition against the Islamic State group, confirmed that the individuals were civilians.

The comments by U.S. officials came after the Arab news channel, al-Arabiya, citing its own sources, reported that three Americans had been kidnapped by militias in Baghdad.

There were no immediate claims of responsibility.

In the past, many kidnappings in Iraq have been carried out by the Islamic State group and Al-Qaeda.

Following the ISIS takeover of Iraq’s second largest city Mosul and large swaths of territory in the country’s north and west, Iraq has witnessed a deterioration in security as government forces were sent to front lines and Shiite militias were empowered to aid in the fight following the collapse of the Iraqi military.