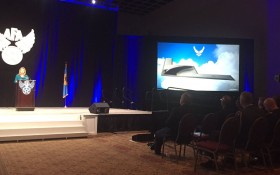 Meet the US Air Force’s newest long range bombed, the B-21. It was unveiled Friday at the Air Force Association’s Air Warfare Symposium in Orlando, Florida.

Now, the Air Force is asking Airmen to help name the new bomber.

“This aircraft represents the future for our Airmen, and (their) voice is important to this process,” James said. “The Airman who submits the selected name will help me announce it at the (Air Force Association) conference this fall.”

Recently, the Air Force has stressed a need for modernization, and says the B-21 is a key part of that.

Welsh continued, “There are many other systems we need to either upgrade or recapitalize to ensure viability against current and emerging threats” and said that, “the only way to do that is to divest old capability to build the new.”