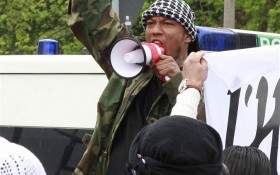 Denis Cuspert, a German-born rapper who called himself Deso Dogg, once bragged that Jihad was “a lot of fun.”

He had tattoos on his fists that read “Str8 Thug” and sang in ISIS propaganda videos, threatened global leaders, and considered himself a hardcore terrorist.

Cuspert ended his rap career after converting to Islam, launching a new career as a terror media mogul. The US Air Force recently put a stop to that noise with a loud message of its own, giving Cuspert a lesson in what “hardcore” really is.

Defense officials said Friday a US airstrike in Syria two weeks ago killed the rapper while he traveled by car through Syria.

“Cuspert is emblematic of the type of foreign recruit ISIL seeks for its ranks – individuals who have engaged in criminal activity in their home countries who then travel to Iraq and Syria to commit far worse crimes against the people of those countries,” said the US State Department when Denis Cuspert was designated a global terrorist this year, using another acronym for the terrorist group.

Brindle said Cuspert was a foreign terrorist fighter and operative for the Islamic State who used social media to take advantage of disaffected youth and potential Western recruits. Brindle says he publicly threatened the US and German citizens and also encouraged western Muslims to conduct attacks on behalf of the Islamic State.