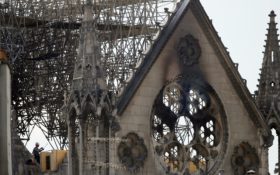 Was the fire inside Notre Dame caused by Islamic terrorists?

Conservative media personality Glenn Beck speculated on Tuesday that the fire may have been intentionally started — and that the alleged attack would be as important to France as the 9/11 radical Islamic terror attacks were to America.

“This is their 9/11,” Beck said on his Blaze Media show. “This is a world landmark and probably, next to the Eiffel Tower, the most iconic building in all of France, and more important than the Eiffel Tower.”

Beck suggested that “Islamists” may have been behind the fire that almost completely destroyed the 800-year-old Catholic cathedral.

“It might have just been started by a cigarette, we don’t know,” Beck said. “But if this was started by Islamists, I don’t think you’ll find out about it, because I think it would set the entire country on fire.”

“They’ve had killings, they’ve had mass shootings, they’ve had people running people down in the streets — the tension is very high. This is their World Trade Center moment,” he said. “And if this was done by terrorists, I think that they will keep it quiet.”

French officials have denied that arson is to blame. Officials suspect the fires were accidentally set during restoration work. Beck himself later clarified his comments and asked social media users not to politicize them.

But Beck wasn’t the only conservative media personality asking questions.

Fox News host Lou Dobbs said Tuesday that French authorities are still investigating the cause of the blaze, and called the decision by officials to rule out terrorism or arson a “political decision.”

875 Catholic churches had been vandalized in France since 2018, Dobbs said. He suggested authorities “perhaps overlooked” the fact that one church in Paris was even set on fire just weeks ago.

“This is context — this is not speculation — this is the situation right now in France,” Dobbs said. “And the recent history of what has happened to Catholic churches throughout the nation.”

“Ignored too often by some covering the tragedy, some who have ruled out speculation about the cause of the Notre Dame fire as they speculate — taking it as gospel that, well, arson was not the cause — was a decision that was made it just hours,” Dobbs said.

Not everyone agrees. NBC News and The Washington Post have both suggested that rumors the Notre Dame fire was intentionally set by terrorists is “Islamaphobic” and an unverified conspiracy theory.

Shepard Smith cuts off French Elected Official after he brings up fact that Churches in France have been desecrated in past year.

“Of course you will hear the story of the politically correct which will tell you it is probably an accident" #NotreDame pic.twitter.com/HHdqSrXstg

In the Middle East, the Islamic terrorist group ISIS celebrated the fire on social media.

The terror group shared pictures of the blaze online with a threat to all Westerners: “Wait until you see what’s next.”

In 2016, radical Islamic terrorists failed in an attempt to blow up the Notre Dame cathedral with a carbomb.

And in 2017, a man who pledged his loyalty to ISIS attacked police officers at the famous church.

French authorities insist the official cause of the fire inside Notre Dame is still under investigation.