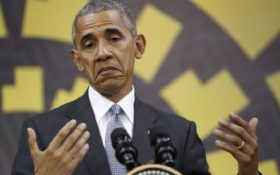 When former President Barack Obama traded five Taliban leaders for an American deserter, Republicans warned that they would be back in the fight before you knew it. They were right – a news report shows that all five of the terrorists that Obama set free are back working hard for the Taliban.

What’s more, Obama knew it could happen – and he didn’t care!

It all began when Bowe Begdahl went AWOL from his base in Afghanistan in June 2009 and got taken captive by the Haqqani terrorist network.

Bergdahl was a deserter who put his brothers in danger by deserting his post… so, naturally he was exactly the kind of soldier Obama wanted to reward.

The terrorists drove a hard bargain: They wanted five of their most vicious leaders released before they’d free an American traitor.

The Taliban demanded that the U.S. release:

Khairullah Khairkhwa, a founder of the Taliban described by the U.S. government as “a narcotics trafficker and probably used his position and influences to become one of the major opium drug lords in Western Afghanistan.”

Mohammad Fazl, who was chief of staff in the Taliban’s army.

Norullah Noori, whom the UN accused of slaughtering thousands of fellow Muslims.

Obama – and his Director of National Intelligence, James Clapper – agreed, signed off on the deal, and let the Taliban Five go – shipping them off to Qatar on May 31, 2014.

In fact, Obama was so eager to get them out of Guantanamo Bay that he broke a “clear and unambiguous” law to set them free, according to the Government Accountability Office.

Patriots were outraged and warned the freed prisoners would go back to combating U.S. soldiers.

“The five terrorists released were the hardest of the hard-core,” Senator Lindsey Graham wrote in a 2014 letter asking the Senate Armed Services Committee to investigate the transfer.

“They have American blood on their hands,” he wrote. “In effect, we released the ‘Taliban Dream Team.’ The United States is less safe because of these actions.”

The South Carolina Republican tried to warn the committee that “this decision by the Obama administration has serious implications for our future national security.”

And Graham promised, as “surely as night follows day they will return to the fight.”

An explosive new report in the foreign press proves that he was right – all five just “reinforced” the Taliban’s army in Qatar.

“The Taliban have reinforced their political office in Qatar,” reported Spain’s La Vanguardia newspaper, “with the accession of five new members, released in 2015 from the US Guantanamo prison (Cuba) after being exchanged by a US sergeant.”

The shocking part isn’t that Graham knew these Taliban terrorists would terrorize Americans again – he always had a good track record sizing up jihadists.

The most jaw-dropping thing is that Obama knew it, too – and didn’t care!

Obama told a news conference in 2014, “Is there a possibility of some of them trying to return to activities that are detrimental to us?”

“Absolutely,” Obama admitted. “That’s been true of all the prisoners that were released from Guantanamo. There’s a certain recidivism rate that takes place.”

Obama knew the dangers they posed to America all along. A 2010 report from his own intelligence agencies warned him that at least one out of every four terrorists sprung from Gitmo returned to the battlefield – and the numbers have only gone up since then.

As of September, 224 former Gitmo detainees had rushed back to their old life of terrorizing innocent men, women, and children – or trying to kill U.S. troops. That’s 30 percent of all the 729 detainees released.

And thanks to the last Democratic president, the number of terrorists working hard to defeat the United States just increased by another five.