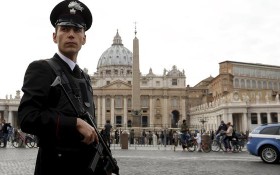 Four immigrant Islamic State recruits were plotting to create a bloodbath on the streets of Rome to send a gruesome message to Christians around the world, authorities say.

Now they’re heading to jail instead.

Italian police have arrested four people in a foreign fighter investigation, including a Moroccan-born man living in Italy who had received Islamic State orders to carry out attacks on Rome during Holy Year, prosecutors said Thursday.

Milan prosecutor Maurizio Romanelli told reporters that investigators intercepted the communication from within Islamic State territory ordering attacks in Italy, “with particular attention to the city of Rome” and focusing on the Holy Year pilgrimage now underway.

Romanelli said authorities acted quickly to close the investigation, arresting four people and issuing arrest warrants for two others believed to be in Islamic State territory.

“This is a new profile, because it was not a generic indication, but an indication given to a specific person who was invited to act within the territory of the Italian state,” Romanelli said.

Authorities arrested the Morroccan-born man, identified as Abderrahim Moutahrrick, and his wife, Salma Bencharki, who allegedly were planning on traveling from their home in Lecco, north of Milan, to Islamic State territory with their children ages 2 and 4. Romanelli said Moutahrrick had taken Italian citizenship and was an accomplished boxer.

Another Moroccan man who was planning to travel with them, identified as Abderrahmane Khachia, 23, was arrested in the northern city of Varese, prosecutors said.

Prosecutors also issued arrest warrants for an Italian-Moroccan couple who left to join Islamic State last year with three small children. Romanelli said that man, identified as Mohamed Koraichi, had become an Islamic State fighter and had communicated the orders to carry out attacks in Italy while making arrangements for the other family to join Islamic State.

The fourth arrest was of Koraichi’s sister, prosecutors said.