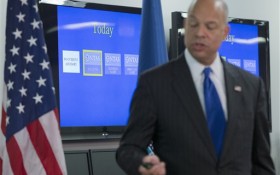 The Homeland Security Department is unveiling an update to the National Terrorism Advisory system and issuing its first “bulletin.”

Secretary Jeh Johnson says adding a bulletin to the alert system is an effort to better inform the public about evolving terrorist threats.

Wednesday’s bulletin, reminding people of ongoing concerns over terrorism at home, will be in effect until June 16, 2016. It outlines much of what Johnson and other officials have said since the attacks in Paris and San Bernardino, California.

Johnson is reiterating that there is no specific or credible terrorist threat against the United States but says the government remains concerned about terrorist-inspired extremists.

The bulletin joins two other existing alert categories, elevated and imminent. It’s the first change since the color-coded system was replaced in 2011.