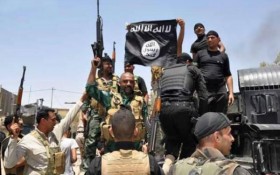 Next week kicks off the unofficial start to summer – but Islamic terrorists are hoping to launch something else entirely, and it has security experts concerned.

ISIS commanders are ordering followers to launch a major attack on Americans on U.S. soil in “celebration” of the Muslim holiday of Ramadan, which begins June 5.

Their objective is simple — kill as many innocent Americans as possible.

“Ramadan, the month of conquest and jihad,” declared Abu Mohammed al-Adnani, the madman considered the “official” spokesman for the Islamic State, according to Reuters. “Get prepared, be ready… to make it a month of calamity everywhere for the non-believers… especially for the fighters and supporters of the caliphate in Europe and America.”

He didn’t just call on attacks against American soldiers locked in battle with ISIS in Iraq. He called on terrorist operatives and sleeper cells to launch a wave of terror right here in the United States.

He even urged supporters not to fly to the Middle East to join ISIS’s twisted effort, but to stay home and kill on American soil instead.

“The smallest action you do in their heartland is better and more enduring to us than what you would if you were with us,” he ranted. “If one of you hoped to reach the Islamic State, we wish we were in your place to punish the Crusaders day and night.”

Despite the threat, President Barack Obama has so far failed to respond. The terror threat level remains unchanged, and there are no indications of a beefed-up law enforcement effort.

In fact, the U.S. continues to accept Middle Eastern migrants that ISIS has promised to infiltrate with fighters.

But based on the past week, the feds need to stop avoiding the issue and get serious about protecting Americans from the Islamic threat – because European authorities are warning that this could be the bloodiest month in history.

“We risk being confronted with a new form of attack: A terrorist campaign characterized by leaving explosive devices in places where big crowds gather, multiplying this type of action to create a climate of panic,” warned Patrick Calvar, head of French intelligence.

But they might not just be aiming for crowds on the ground… but also innocents in the air, planes full of travelers who want nothing more than a little summer fun with family members.

It’s not yet clear what brought down EgyptAir Flight 804 last week, but many leading experts believe it was a terrorist act.

This plane didn’t start out in Egypt, which is known for its problems and where lax security may have helped terrorists down Metrojet Flight 9268 to Russia last year.

The flight originated from Charles de Gaulle Airport in Paris, home to some of the world’s strictest security standards.

If ISIS-linked radicals have managed to find a way to evade that extra security and get a bomb onto a plane in Paris, there’s no telling where they might strike next.

And that may even be why there has been no claim of responsibility just yet.

“The more sinister but less likely explanation is that a terrorist group has figured out a novel way to attack aircraft and is concealing its involvement in order to replicate the attack elsewhere,” intelligence advisory company Strategic Forecasting said in a report issued over the weekend.