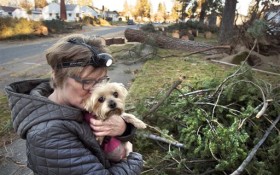 Janet Gray, one of thousands of people in the Spokane area still without power following a major windstorm, gave up living in her house when the thermostat hit 38 degrees and moved to a hotel.

Despite the cold, food she bought for Thanksgiving spoiled and she called off dinner plans with relatives who planned to travel from western Washington for the holiday.

“All our food for Thanksgiving is ruined,” the 42-year-old Spokane woman said. “For now, it’s canceled.”

Gov. Jay Inslee planned to meet with local leaders Tuesday as tens of thousands of people who have been shivering for nearly a week remained without power.

A major windstorm Nov. 17 damaged the electrical grid in Spokane, the state’s second-largest city. Winds topping 70 mph in the Northwest snapped power poles and toppled trees that crashed through roofs and crushed cars. Three people died when trees fell on their vehicles, and heavy rains flooded roadways and homes.

More storms were expected to worsen the plight of over 29,000 customers in Spokane County who have been living without heat and light amid subfreezing temperatures — the forecast calls for snow and wind chills dropping into the single digits Monday night. Stores sold out of firewood as people used wood stoves to heat their homes.

Gray said she’s frustrated and angry with the local utility because she cannot get answers to when power will be restored to her home in Spokane’s South Hill area.

Crews are working around the clock, but the extent of destruction means most customers won’t be able to turn on their heaters, TVs and light switches until late Wednesday evening, according to Avista Corp., the Spokane region’s major electrical utility.

“Living without power in these cold conditions for several days is very stressful and trying,” said Avista Chairman Scott Morris. “Let me assure you, we continue to dedicate every available resource at our disposal to restore your power as we recover from the worst natural disaster in our company’s 126-year history.”

Those still in the dark Monday were mainly in locations in Spokane County where it was most difficult to restore electrical service, Avista said. They represent about 20 percent of the company’s customers in the county.

Public schools have been closed since Wednesday because many buildings lacked electricity. While power has been restored to most schools, the district decided to cancel classes all week for 29,000 students because downed power lines and trees blocking sidewalks where children walk pose a danger.

Five schools were operating as warming shelters for those without electricity and served 2,100 meals over the weekend, officials said.

Last week’s storm initially knocked out power to 180,000 customers across eastern Washington and northern Idaho, Avista said. The utility brought in line crews from across the West and Canada to try to rebuild its damaged system.

Additional crews arrived from Montana and Oregon on Sunday, with 123 crews now working 24 hours a day to restore power, the company said.

“This workforce faces the daunting task of repairing the hundreds of miles of distribution lines that were destroyed in Tuesday’s devastating windstorm that left a path of toppled trees, broken poles and tangled wire in its wake,” Avista said.

Replacing one power pole can take up to six hours, the company said.