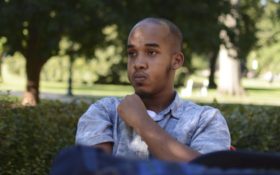 The “evil loser” Islamic terrorist responsible for a car-and-knife attack at Ohio State University last year left behind a torn-up note in which he urged his family to stop being “moderate” Muslims and said he was upset by fellow Muslims being oppressed in Myanmar.

Abdul Razak Ali Artan, a refugee from Somalia, also told his parents in the note, reassembled by investigators, that he “will intercede for you in the day of Judgment,” according to the investigative case file of the attack obtained through an open records request.

“My family stop being moderate muslims,” says a transcription of the handwritten note made by investigators and found by Artan’s bed in his family’s apartment.

“Oh! Ummah we are not moderate muslims, we are muslims,” the note continues, using the word referring to the Muslim community.

Artan also wrote: “In the end, I would like to say that I pledge my allegiance to ‘dawla,'” an Arabic word that means state or country and a likely reference to the Islamic State group. “May Allah bless them.”

He concludes by saying he’s leaving his property to his beloved “but yet ‘moderate mother.'”

The 18-year-old Artan was shot and killed by an Ohio State officer moments after driving into a crowd on Nov. 28 and then attacking people with a knife.

The records show Artan asked to drop all his classes at Ohio State on Nov. 16, saying he had “No regrets whatsoever.”

In a series of Facebook rants previously reported, Artan nursed grievances against the US. “If you want us Muslims to stop carrying lone wolf attacks, then make peace” with the Islamic State group, he warned in those posts in which he also railed against U.S. intervention in Muslim lands.

Artan posted those comments at 9:49 a.m. on Nov. 28, just three minutes before the attack began, according to an unclassified FBI report showing the time line of the attack that was released through the open records request.

One of his brothers saw those comments and tried too late to contact him, thinking maybe it was a joke or his account had been hacked, Fitrakis said.

That timeline and other FBI records also show that Artan went to Washington, D.C. a few days before the attack where he also made unidentified purchases at a Walmart. The family didn’t realize he’d traveled there, has no idea why he went, and urges anyone with information about that trip to contact authorities, Fitrakis said.

The day before the attack, Artan left his job at a nearby Home Depot, saying he was tired, a co-worker told investigators. This was unusual, “as he never left early from work,” the co-worker said. Artan had told the co-worker several times that fall he was disgruntled with school and wanted to drop out, according to the records.

The morning of the attack, Artan bought a set of knives, a tomato and a cucumber at 7:20 a.m. at a Walmart on the west side of Columbus.

The “suspect was pleasant and very polite during the checkout process,” the Walmart cashier later told investigators. Artan wanted to buy a chicken breast as well but didn’t have enough money, the file said.

At 7:50 a.m., Artan dropped his sister at a high school near their home on the city’s west side. He paid a brother $40 he owed him around 9:30 a.m., when the brother last saw him, according to FBI records.

After arriving on campus, Artan drove his brother’s Honda Civic over a curb and into a crowd of people and crashed it into a planter. Artan then got out and started slashing at people with an eight-inch knife, records show. In a coincidence, a nearby building had been evacuated because of a reported gas leak.

OSU officer Alan Horujko, on the scene because of the gas leak, saw the crash, then chased Artan as he slashed at people, yelling at Artan to drop the weapon, according to Horujko’s account of the attack. Artan eventually stopped and came toward the officer, according to the report.

“The suspect was looking directly at me as he charged toward me, but I could see no expression or emotion in his eyes,” Horujko said in his account. “I believed the suspect was going to attack me with the knife, and I was in fear for my life.”

Horujko shot and killed Artan moments later. His actions were cleared by a grand jury.

Authorities believe Artan’s attack was partly inspired by an American-born cleric killed in a U.S. drone strike in Yemen.

Ohio State’s student newspaper, The Lantern, ran an interview in August with an Artan in which he criticized the media’s portrayal of Muslims and expressed concern about how he would be received on campus.