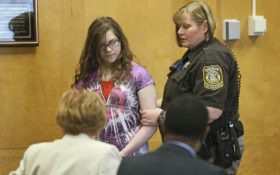 One of two teenagers charged with repeatedly stabbing a classmate to impress a fictitious horror character called Slender Man has decided to plead guilty to a lesser charge.

Fifteen-year-old Anissa Weier pleaded guilty Monday to attempted second-degree homicide as a party to a crime, with use of a deadly weapon.

She initially faced a charge of attempted first-degree intentional homicide in the 2014 attack on Payton Leutner in Waukesha.

The plea means her trial next month will look only at whether she is legally responsible for the crime or not guilty because of mental illness. She could face 10 years in prison if she’s found guilty. If not, she’ll spend three years in a mental hospital.

Weier’s co-defendant, Morgan Geyser, also is due in court Monday for a status hearing.