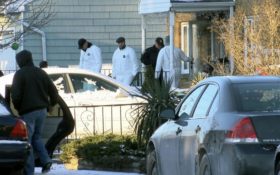 Monmouth County Prosecutor Chris Gramiccioni said the teen would be charged with four counts of murder and a weapons offense. The shooting occurred late Sunday in the New Jersey shore town of Long Branch, about 20 minutes before midnight.

A possible motive for the violence has not been disclosed. The rifle used in the shooting was legally registered to a resident of the house where the killings took place, Gramiccioni said.

The teen’s name has not been disclosed, and it wasn’t known Monday whether he had retained an attorney.

The victims were identified as the boy’s parents, Steven Kologi, 44, and Linda Kologi, 42; his 18-year-old sister, Brittany; and 70-year-old Mary Schultz, who lived with the family.

Gramiccioni described the shooting as an isolated domestic incident and said the teen was taken into custody without incident.

The teen’s grandfather and brother were not targeted and left the home unharmed, police said.

The teen is expected to make an initial court appearance Tuesday, and prosecutors were considering whether they would seek to move the case to adult court.

Jalen Walls, 18, a neighbor who went to school with Brittany Kologi, told NJ.com that he frequently went to the Kologi house. He said the 16-year-old boy required special assistance and was cared for by his mother. The teen did not attend the same public schools as his siblings, he said.

“But he was fully functional and comprehended what we were saying,” Walls said.

“I could never have believed this could have happened. They were all good people,” Carmen Gaudious told the Asbury Park Press. “I just spoke to Steve three days ago. He looked good. It was cold so we didn’t say much. He wished me happy holidays.”

A family friend has set up a GoFundMe page to raise money for the family’s funeral expenses.