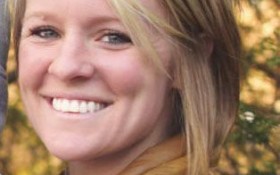 Indianapolis police announced Monday they have arrested an 18-year-old man in the shooting death of a pastor’s pregnant wife during an apparent home invasion.

Larry Taylor of Indianapolis was arrested on a preliminary charge of murder in this month’s death of 28-year-old Amanda Blackburn. Officers from the department’s gang and violent crime units arrested Taylor with help from U.S. Marshals, according to an Indianapolis Metropolitan Police Department news release.

It wasn’t immediately clear whether Taylor had an attorney. The Marion County Prosecutor’s Office was expected to review the case.

“All victims of criminal homicides deserve closure, and as a community we must send a collective message that violence is not an option,” Police Chief Rick Hite said in the statement. “Our detectives have worked tirelessly going days without sleep to solve murders in our city.”

Authorities said investigators would continue to follow all leads, including talking with individuals who may have knowledge of the case.

Blackburn was shot in the head during the attack on Nov. 10 and died the next day. She was 13 weeks pregnant and the child did not survive, a family spokeswoman has said. The Blackburns also have a 15-month-old son, who was upstairs in a crib at the time of the attack.

Investigators believe the suspect, whom neighbors also reported seeing walking in the area, may have seen Blackburn’s husband, Davey, leave early in the morning to go to a gym shortly after the suspect allegedly burglarized a nearby house. Police had sought the public’s help by circulating images of a man caught on home surveillance cameras.

The Blackburns moved to Indianapolis from South Carolina to found the independent Resonate Church in 2012.