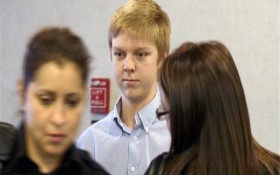 The U.S. Marshals Service has joined the search for a Texas teenager who was serving probation for killing four people in a 2013 drunken-driving wreck and successfully argued that he suffered from “affluenza.”

In other words, he was too rich and coddled to know right from wrong.

The probation officer for 18-year-old Ethan Couch, who is suspected of violating his probation by drinking with friends at a party, says the man is missing.

And some suspect he’s fled overseas to escape justice.

Tarrant County Sheriff Dee Anderson said Thursday the search for Couch was drawing federal resources. The FBI says arrangements are being made for the bureau to join the search.

Couch’s attorneys successfully claimed at his trial that Couch’s irresponsible lifestyle was due to wealthy parents who coddled him into a sense of irresponsibility, where an expert termed the condition “affluenza.” The 10 year probation sentence Couch received stirred fierce debate.

Couch, as part of his punishment, was to receive alcohol and drug rehab and would face prison time if he runs away or violates any other terms of his probation.

Couch was 16 at the time of the accident. His blood-alcohol level was three times the legal limit for an adult and there were traces of Valium in his system when he lost control of his pickup truck and plowed into a group of people helping a woman whose car had stalled.

Lawyers for Couch issued a statement saying his probation officer hasn’t been able to reach him for several days, prompting authorities to issue the juvenile equivalent of an arrest warrant for the teen. They’re also seeking the boy’s mother, Tonya Couch, with whom he had been living.