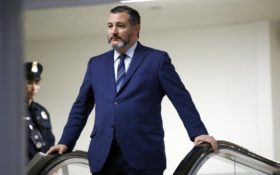 In the highly sensitive political world of Washington, D.C., a major party figure expressing concerns this close to the election is very rare.

Cruz told Fox News’ Sean Hannity that with Trump sidelined while recovering from coronavirus and the mainstream media supporting Democratic presidential candidate Joe Biden, he’s “very worried” the White House — and even the Senate — could end up in Democratic control in January.

“The press is fully … in support of Biden,” Cruz said, and it has him concerned.

“I’m worried about the election. I think it’s really volatile. I think it could go either way,” he said. “I think we could have a fantastic election, the president could win by a big margin and we could win both houses of Congress.”

“I very much hope it’s the former and not the latter — and it depends on turnout. It depends on who shows up,” the Texas Republican continued.

“It’s one of the reasons I think the confirmation battle over Judge Barrett is so important,” he said. “We’re going to confirm Judge Barrett. We’re going to do it by the end of the month. The Democrats are losing their mind. And I think that’ll be really important [because that puts the Supreme Court on the ballot].”

Hannity pointed out he’s also worried. He said that Trump is already behind in the electoral college count because the Democrats control so many large states.

Trump has to “start out without California, Oregon, Washington, New Jersey, New York, and Illinois. It’s a lot of electoral votes.”

“It’s always hard for a Republican to win, and I don’t trust all these new laws that are going on the books seemingly every day and every state extending out how many days they’ll count the vote,” the Fox News star pointed out.

Cruz said Democrats are highly motivated because of their hate of Trump, and aren’t being driven to the polls by their love for Biden.

“The left is showing up,” he said. “They’re pissed off. They hate Trump.”

“We’ve got to make sure everyone else shows up.”

You can watch the clip here —

Democrats are losing their minds. Why?

And we are going to do it before the end of the month. pic.twitter.com/zYDUrwyY04