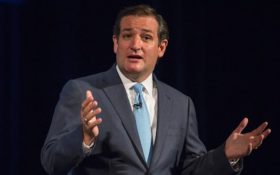 Liberal judges have prevented President Donald Trump from building the Wall, and Democrats promise they’ll wipe our border off the map. But a Republican lawmaker may have just come up with a new way for the president to keep his top campaign promise — and maybe even get re-elected in 2020.

The man with the plan is former Trump rival Senator Ted Cruz… and he used a brilliant piece of legal Judo that could flip the script on the Democrats.

Cruz used the Democrats’ own issue against them to launch a plan that could build the Wall and cut off illegal immigration forever.

The Texas senator said that U.S. officials are doing the best they can to care for the 4,600 people who cross the border every day… but they need more help.

So, he asked the Trump administration to let ordinary Americans donate money, or items like toothpaste and diapers, to young illegal aliens in U.S. custody.

Cruz called for the government “to establish and publicize a process for accepting private donations from charitable organizations, faith-based organizations” and other groups.

Cruz said he hoped federal agents would use “the generosity of the American people to help manage the humanitarian crisis on our border,” he wrote in a letter to the acting Homeland Security (DHS) Secretary Kevin McAleenan last week.

Letting people donate to poor children that Democrats say are living in “concentration camps”… who could be against that?

But remember something: Ted Cruz is a constitutional lawyer with an expert’s grasp of the law. He knows what this really is.

The Democrats who created this crisis may have just signed the Wall’s construction papers!

Americans in every city of the country are ready to chip in to help Donald Trump start laying bricks on the Rio Grande.

A private organization has already collected more than $25 million to get a jump start on the president’s “big, beautiful Wall”… and that could just be the beginning.

“I take the security of the American people very seriously which is how I find myself building a wall on the southern border,” the Iraq War vet said.

Kolfage said he got “sick and tired of watching politicians in both parties obstructing President Trump’s plan,” so he jumped into action — and at least 340,000 Americans joined him.

GoFundMe tried to pull the plug on them: The federal government wasn’t set up to receive the money, so Kolfage established a non-profit organization called “We Build the Wall.”

If the government wouldn’t build the Wall, he’d do it himself!

GoFundMe accused Kolfage of lying to donors and threatened to empty Kolfage’s bank account by refunding every dime that had been donated to him.

But a funny thing happened: Almost no one wanted their money back.

So, in May Kolfage actually bought a parcel of private land and built a Wall across a huge stretch of the border along El Paso.

That area is “GROUND ZERO for illegal drugs, migrants and human sex slaves,” Kolfage said. “WE ARE STOPPING THEM NOW!”

And they’re already planning the next stretch of Wall in Sunland Park, New Mexico.

But they’ve built a private wall on private land — and that could be a legal problem in the future.

If a Democrat buys the land, he can tear it down.

Or the local city council can rule the Wall violates property ordinances.

Or, the next Democratic president could seize the land through eminent domain and dynamite the Wall.

But if Americans could give the money directly to the government, Open Borders Democrats and establishment Republicans couldn’t drag their feet anymore.

The idea is so good that it was already tried last year. Congresswoman Diane Black of Tennessee introduced a bill to let U.S. citizens fund the border Wall last May — but the Republican-controlled House made sure it went nowhere.

Ted Cruz may have just given Trump a way to get the funding he needs, keep his campaign promise, do an end-run around Democrats, protect the border, AND win a second term as president of the United States.

The Democrats didn’t know how bad they’d blown it… but they could find out next November, thanks to Cruz.