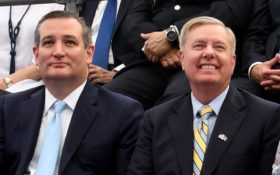 Sen. Ted Cruz, R-Tex., is putting the Hollywood elites on notice after a new report exposed an ugly form of racism.

Because despite growing calls for diversity, and despite Hollywood pretending to be a leader, the report finds many of their films are now whiter than ever.

And it’s all to appease moviegoers in communist China, where audiences prefer light-skinned actors.

An academic study has found that since 2012, when China began allowing more foreign films into the country, Hollywood movies have cast more light-skinned actors in starring roles.https://t.co/C7nY6yacNf

“It’s that bad and worse,” he wrote. “Hollywood companies routinely alter the publicity of movies to appeal to the racial biases of Chinese audiences and the Chinese Communist Party.”

He also referred to an infamous 2015 incident in which “Star Wars” fans noticed the Chinese poster had a key difference: The film’s Black character, Finn – portrayed by British actor John Boyega – was shrunk and diminished.

Star Wars' Finn (who happens to be black) and Chewbacca (happens to be Wookiee) get shafted in China. HT @asmuniz pic.twitter.com/ATpvcd51L6

“They slice up promotional materials like posters and previews to erase out black actors,” wrote Cruz, who’s known as something of a pop culture aficionado on Capitol Hill. “Brazen hypocrisy,” he added.

The Axios report is based on a study centered on 3,000 movies made in the three years before and after 2012, when Beijing authorities opened the door to more foreign films.

They found a “light skin shift” — an 8 percent increase in films with “very light skin” actors in the main roles, over that time.

That might be a tough argument to make given the other key fact revealed in the study: This effect wasn’t seen in the genres that aren’t typically marketed in China, such as horror and comedy; only the action films and “summer blockbuster” type of movies that are routinely distributed to the nation.

Hollywood wants to capitalize on that emerging big-money market, but that cash isn’t just there for the taking without compliance. Studios have to meet Beijing’s strict restrictions… and in many cases that means outright censorship.

Disney is currently coming under fire for its live-action remake of “Mulan,” which was done with the help and cooperation of Chinese authorities.

The credits thank eight different Chinese government entities – including the security bureau of the city of Turpan, home of several Uighur Muslim concentration camps, which the Chinese prefer to call “reeducation” camps.

Sen. Josh Hawley, R-Mo., called Disney out over it.

“How exactly does giving ‘special thanks’ to the officials responsible for imprisoning, torturing, and forcibly sterilizing millions of people because of their ethnicities and beliefs align with your supposed commitment to promoting human dignity and respecting human rights?” he said in a letter to the company, adding:

“How does glorifying the Chinese authorities perpetrating abuses in Xinjiang provide comfort, inspiration, and opportunity to Uighur children—including those who were never born because the CCP forced their mothers to abort them? Disney’s actions here cross the line from complacency into complicity.”

The industry was also caught with egg on its face in another recent instance, cutting scenes from the Oscar-winning movie “Bohemian Rhapsody” to please Chinese censors.

Those were the scenes depicting Freddie Mercury as gay – once again insisting that the PC standards Hollywood pushes on U.S. audiences are little more than a facade.

Or, as Sen. Cruz put it, “brazen hypocrisy.”