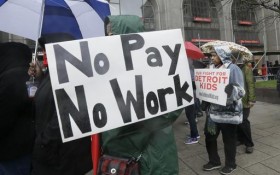 Nearly all Detroit public schools are closed as mass teacher sick-outs over pay roll into a second day.

The district released a list of 94 closed schools as of 7:15 a.m. Tuesday.

Detroit Federation of Teachers president Ivy Bailey said in an email Monday night that educators are not expected to show up for work Tuesday.

The district is projected to run out of cash by June 30. Without funds from the state, teachers who have opted to receive their pay over 12 months instead of the course of the school year will not get checks this summer.

Another protest and a union meeting are planned Tuesday.