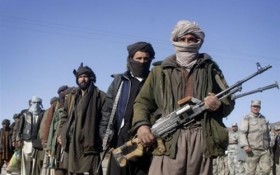 The Taliban announced the start of their warm-weather fighting season on Tuesday, vowing “large-scale attacks” in the 15th year of their war against the U.S.-backed Afghan government.

In an email to media, the militants said the spring offensive had begun at 5 a.m. They dubbed the campaign “Operation Omari” in honor of Taliban founder Mullah Mohammad Omar, who died three years ago. The statement said waging jihad against American invaders is a holy obligation.

It said this year’s campaign will incorporate suicide attacks, assassinations, and other tactics aimed at undermining the enemy’s morale.

The Taliban added that in areas under their control, “mechanisms for good governance will be established so that our people can live a life of security and normalcy.” The insurgents control several rural districts and last year seized the northern city of Kunduz and held it for three days.

The Taliban said they would try to avoid killing civilians or destroying civilian infrastructure, and would carry out a “dialogue with our countrymen in the enemy ranks” to try to convince them to join the insurgency.

The Taliban went through a period of infighting after Mullah Omar’s death became public last summer. Mullah Omar’s deputy, Mullah Akhtar Mansoor, had run the insurgency in his name and was elected as his successor by a small clique amid mistrust from the rank and file.

The dispute had little impact on the battlefield, however, where the Taliban have advanced on a number of fronts over the past year. And in recent months, Mansoor has consolidated power, bringing several onetime rivals back into the fold.

The Kabul government has meanwhile been working with the U.S., China and Pakistan — which has some influence over the Taliban — to revive peace negotiations, but the insurgents earlier this year refused to take part in any talks.

The fighting subsides in much of Afghanistan during the winter, when snow and inclement weather descends on the mountainous border with Pakistan, making it difficult for the militants to travel back and forth and stage attacks.

But the Taliban remained on the march in the warmer south of the country, where they threatened or briefly seized strategic territory in three provinces.

The violence is expected to intensify once the poppy harvest in the southern provinces is finished in coming weeks. The Taliban will deploy extra forces to protect smuggling routes used for arms, minerals and other contraband that fund the insurgency.

Jabbar Qahraman, presidential envoy to Helmand, said most of the estimated 5,500 government troops and police killed in action in 2015 lost their lives in the opium-producing southern province.

He blamed not only the Taliban but an “opium mafia” working with the insurgents. The drugs gangs “are a big headache as they are so active, and they have the full support of Taliban fighters in Helmand, each helping the other to their own benefit,” he said.

Most of the world’s heroin is produced from Helmand’s poppy crop, worth up to $3 billion a year, with much of the profits going to fund the insurgency. Officials and diplomats in Kabul have said that Mansoor is the kingpin of this illicit trade.

Local officials say security forces have been overwhelmed by months of heavy fighting across Helmand. Ali Shah Khan, a tribal elder in Sangin district — which was under attack for weeks — said Kabul had been warned of the Taliban threat “so many times but no one listened and that is why the Taliban have gained control of more than half of the province.”

At one point in December, the province’s former deputy governor, Abdul Jan Rasoolyar, issued a plea for help on his Facebook page, warning the entire province could fall.

“Without good leadership and coordination between the security forces, they just let the Taliban gain control over more territory,” Khan told the Associated Press last week.

U.S. and NATO forces formally concluded their combat mission at the end of 2014, shifting instead to a training and advisory role while continuing to carry out counterterrorism operations.

But as the situation in Helmand deteriorated last year, some 800 U.S. soldiers were sent there in the first deployment since the drawdown.