Syrian migrants arriving - and they haven't been screened! - The Horn News 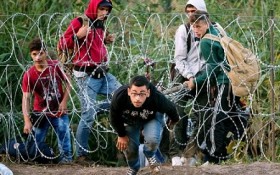 The U.S. government’s migrant screening policy is supposed to identify if a refugee is potentially a threat to America.

But in the interest of getting thousands of Syrian refugees moved into the country before the 2016 presidential election, caution — and these screenings — are being thrown to the wind.

The first Syrian family to be resettled in the U.S. under a sped-up “surge operation” for refugees left Jordan on Wednesday and arrived in Kansas City, Missouri amid criticism from opponents.

While the resettlement process usually takes 18 to 24 months, the Obama administration is rolling out a surge operation that will reduce the time to three months, said Gina Kassem the regional refugee coordinator at the U.S. Embassy in Amman, Jordan.

Critics say the Obama administration is clearly breaking a promise to make sure refugees were carefully and thoroughly vetted before they landed on American soil. And it all may be because the administration is worried that the resettlement plan will be scrapped if a Republican wins the November presidential election.

But it looks like he’s breaking his word on that, too — and the real number could be much larger than what the American people have been told.

“The 10,000 (figure) is a floor and not a ceiling, and it is possible to increase the number,” Kassem told reporters.