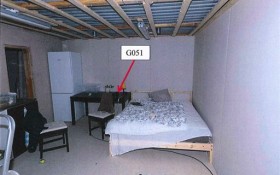 A Swedish doctor went on trial on rape and kidnapping charges Monday after admitting to imprisoning a woman in a home-made bunker in what his defense lawyer said was a desperate attempt to find a girlfriend.

Prosecutors said the 38-year-old man had planned the crime for years and may have tried to capture other victims before sedating and abducting the woman during a date in Stockholm.

The victim, who is around 30, didn’t suffer serious physical injuries during her weeklong abduction. But she was deeply traumatized by the ordeal and stressed about having to face him in court, said her lawyer, Jens Hogstrom.

“She’s having a very hard time right now,” Hogstrom told The Associated Press during a break in the proceedings. “She’s got post-traumatic stress, flashbacks from what happened. She has nightmares.”

The doctor, whose name wasn’t published in Sweden in line with privacy rules, has confessed to almost everything in the indictment, but denies having raped the woman while she was unconscious.

In court documents obtained by the AP, he told investigators he abducted the woman on Sept. 12 in her Stockholm apartment during their second date. Pretending to be an American living in London, he gave her strawberries laced with a sedative and then drove 530 kilometers (330 miles) to his isolated countryside home in southern Sweden, giving her drugs intravenously during the journey to keep her unconscious.

The woman was terrified as she woke up in a soundproofed bunker that the doctor had spent years building inside a machine shed next to his house.

“I didn’t know what would happen, whether he would torture me, kill me or rape me,” she told investigators. “He just told me he would keep me there for a few years and then release me.”

At one point she tried to attack him with a pair of screws she found in the bunker, but as she was still dazed from the drugs, he easily subdued her and warned her he would shackle her to the bed and feed her only bread if she tried it again, court documents show.

The defendant kept her in the bunker, except for brief occasions when he led her in handcuffs to his home. But on Sept. 18 he took her to a police station, allegedly to show police that she was fine and staying with him voluntarily. As soon as police took her aside for questioning, she “broke down” and told them everything, a police report shows.

“There is no simple explanation for this,” defense lawyer Mari Schaub told reporters Monday. “This is a high-performing person who is unwell psychologically and has been longing for a life partner.”

A psychiatric examination found he wasn’t suffering from a severe mental illness. If convicted, he could face life in prison.

The victim is demanding 380,000 kronor ($44,000) in damages, which her lawyer said is high by Swedish standards. Damages are typically much higher in other countries, particularly the U.S.

Court documents show the defendant did his military service as a ranger in northern Sweden and studied medicine at Stockholm’s prestigious Karolinska institute, which awards the Nobel Prize in medicine.

“I’m shocked and surprised,” Malmlind told AP. “He was appreciated by both patients and staff. There was no sign of any strange behavior.”

Prosecutor Peter Claesson told reporters that a parallel investigation was ongoing to find out whether the doctor had attempted to capture other women.

“That cannot be ruled out,” Claesson said.

Police seized dozens of files from the defendant’s computer with information on secret doors, locks and lists of construction material. One file labeled “Contract” listed “discounts” in years that “guests” could get by performing various sexual acts.

In transcripts of the police interrogations, the defendant said that he never intended to harm the woman. Except for the abduction, which he called a “little parenthesis,” he said “I have treated her well, in my opinion.”

Court officials are set to go to southern Sweden on Tuesday to inspect the defendant’s home. Neither the defendant nor the victim is expected to take part.