SWAT team gets its missing mascot back - The Horn News 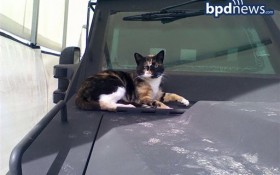 The Boston Police Department’s SWAT team has been reunited with its beloved, unofficial mascot.

The department posted on its website that SWAT Cat returned to the unit’s home base in the city’s Roxbury neighborhood Thursday morning.

The female stray with white, black and light orange fur first started prowling around in 2013, looking for belly rubs and free meals. But she disappeared in late November.

Police feared the worst and even put out an all-points bulletin for the missing feline, posting a shot on Facebook of SWAT Cat lounging on the hood of an armored vehicle.

The department said Thursday that officers are “just happy that she was safe all this time.”