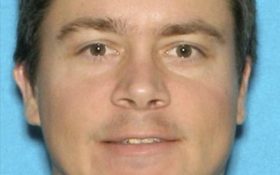 Authorities say a casino dealer identified as the suspect in a deadly company picnic shooting on Sunday has been arrested in a small town in the Texas Panhandle.

That’s a town off Interstate 40 in the Texas Panhandle between New Mexico and Amarillo.

Wrobel is accused of killing Venetian executive Mia Banks and badly wounding co-worker Hector Rodriguez at close range while they sat at a table at a Las Vegas park.