Survivors of Florida massacre return to class - The Horn News 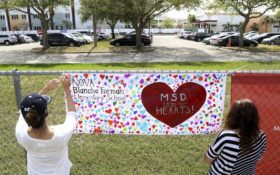 About 50 uniformed officers marched into Marjory Stoneman Douglas High School early Wednesday, just one aspect of the heavy security as classes resumed for the first time since 17 students and teachers were killed by a troubled teenager with an AR-15, thrusting them into the center of the nation’s gun debate.

The heavily armed police presence, designed to make the community feel secure, is also disturbing in itself, some students said.

Grief counselors are on campus as well “to provide a lot of love, a lot of understanding” and help students “ease back” into their school routines, Broward Schools Superintendent Robert Runcie said. Officers with therapy dogs also stood outside.

Wednesday’s class schedule started with 4th period, so that students and teachers could return to the people they were with during the shooting. The freshman building where the massacre took place remains cordoned off.

Casey Sherman, a 17-year-old junior, thinks the schedule was a good idea so kids can “get it over with,” and not worry about it all day. Up until 11:30 p.m. working on preparations for the March 14 national school walkout against gun violence, she said she’s not afraid to be returning, “just nervous.”

“We did go through a tragedy,” said Sherman, who walked in holding hands with her boyfriend. “It was terrible but if you let it stop you … it’s not how you go down, it’s how you get back up.”