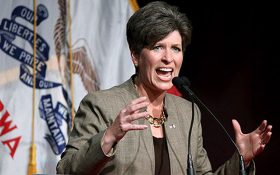 Last week, Republican presidential nominee Donald Trump had seemingly narrowed down his vice presidential shortlist to two contenders. But the brash billionaire is known for throwing curveballs — and recent reports have caught political analysts off guard.

According to reports, Trump spent July 4 meeting with a dark horse candidate for his running mate — Iowa Sen. Joni Ernst.

A former state lawmaker and military veteran with a rural upbringing, Ernst has been considered a rising star in the Republican Party since she became Iowa’s first woman in Congress in 2014.

Ernst shot to national fame in 2014 with a TV ad in which she boasted about castrating pigs and promising to cut the pork in Washington and “make ’em squeal.”

In addition to adding military experience to the ticket, Ernst’s inclusion might also help Trump improve his appeal among women voters, with whom he currently lags.

The pair met on Monday and had “a good conversation” about issues concerning Iowans, she said in a statement. Trump tweeted the following —

I look forward to meeting @joniernst today in New Jersey. She has done a great job as Senator of Iowa!

Ernst told Fox News, “I will continue to share my insights with Donald about the need to strengthen our economy, keep our nation safe, and ensure America is always a strong, stabilizing force around the globe.”

Over the weekend, Trump also sat down with Indiana Gov. Mike Pence, though a spokesman for the governor said that “nothing was offered.”