Surprise! Obama STABBED IN THE BACK... and Trump loved it - The Horn News 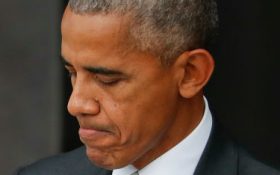 Obama’s failures were slammed by top music superstar and fashion icon Kayne West on Thursday. Kayne then shocked his 29 million followers by showering Trump with praise for his work. Trump responded to Kanye with his own message: “MAGA!”

Kanye isn’t just a rap superstar. That would be a vast understatement. He’s one of the biggest music icons of his generation.

In terms of cultural weight, he’s been compared to The Beatles, Elvis Presley, and Michael Jackson.

Embracing the controversy, Kayne then turned his attention on Obama’s legacy —

Obama was in office for eight years and nothing in Chicago changed.

Imagine if John Lennon had gone on Walter Cronkite’s news show in 1968 and told young people to vote for Richard Nixon? That’s the size of the political shockwaves this has sent through pop culture.

It has already had a huge impact in Hollywood.

Another larger-than-life hip-hop star joined Kayne’s criticism of the Democratic party and told his 7.3 million followers —

Black people don’t have to be democrats.

Kayne and his friends haven’t always been conservative — but they’ve always been outspoken.

During the 2008 presidential campaign he produced a popular song in support of Obama. And Kanye stoked controversy in 2005 after his outspoken criticism of former President George W. Bush’s response to Hurricane Katrina.

Normally the political opinions of Hollywood actors and music celebrities isn’t something everyday Americans concern themselves with.

After all, what does playing pretend in front of a camera add to politics?

But when a superstar of this magnitude upends the whole table and scatters the liberal narrative to the wind, it’s worth taking a moment to enjoy the panicked response from Democrats.

From sea to shining sea, young people woke up Friday and found out the liberal celebrity echo chamber had been silenced.

It has liberal snowflakes freaking out. Meanwhile…