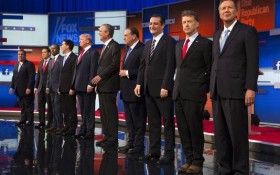 He’s behind in the polls and hasn’t spent much time in Iowa — but New Jersey Gov. Chris Christie’s campaign is set to get a major bump in the lead-off caucus state.

Christie has just landed major endorsements from nearly all of the local Iowa Republican heavyweights who tried to recruit him to run for president four years ago. It could help kickstart his otherwise floundering 2016 campaign, and just in time to cause a huge Iowa surprise.

Six of the seven big-money donors and activists who flew to New Jersey to urge the Republican governor to run in the 2012 race plan to formally endorse Christie in Des Moines today. Because of the way the Iowa caucuses are structured, the vocal and monetary support from influential local GOP leaders could carry major weight when the votes are cast.

“What we’ve looked at and come around to is similar thoughts as in 2011,” said Bruce Rastetter, a major GOP donor who made his fortune in the pork and ethanol industries. “We need blunt, bold leadership. We need somebody that can actually govern.”

Of the seven who hopped aboard the private plane to the east coast in 2011, two have long been vocal supporters and one has said he would not endorse because he works for an elected official. Getting the majority to publicly endorse Christie is a boon for his campaign, which has struggled to compete in a crowded field that includes attention-grabbing front-runner Donald Trump.

“Whatever he needs, we’re going to be behind him,” said real estate developer Gary Kirke, who said the group wanted to stick together.

Christie’s backers think his chances are improving after strong debate performances and with two governors — Wisconsin Gov. Scott Walker and former Texas Gov. Rick Perry —now out of the race. Now Rastetter said he hopes the endorsements will send a message to Iowa Republicans, that they should “give him another look.”

Christie held a town hall meeting with Rastetter Monday night, telling the crowd gathered in a cavernous barn that “you’ll always know how hard I’m willing to fight for you.” He declined to talk about the endorsements in advance of the Tuesday press conference.

The trip this week marks his ninth to the lead-off caucus state this year. Christie, who has focused more heavily on New Hampshire, has spent less time here than many other contenders, though he put in a marathon day at the Iowa State Fair in August and has a well-regarded team, with respected operatives Phil Valenziano and Jeffrey Boeyink.

Campaign aides said Christie will be ramping up his visits to the state in the fall. Mikel Derby, who works for the state’s transportation department and who was part of the Christie recruitment effort in 2011, said there is still time for Christie to do well.

“History is littered with the Bachmanns and Walkers who are superstars real early. There’s no purpose in peaking in August and September,” said Derby, who has been with Christie all along.

Still, while these endorsements matter, most agree Christie will still have to invest more time in Iowa. Republican State Rep. Chip Baltimore, who has not endorsed a candidate, said there was no substitute for retail politicking.

“If he is not here, he will not do well,” Baltimore said. “Gov. Christie, when he talks to people and meets people, is very persuasive. People walk away from that generally feeling positive toward him.”