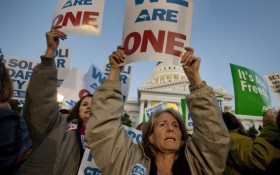 In just five days the United States Supreme Court will hear a case that could financially ruin public unions nationwide and spell an end to Big Labor’s influence in politics.

But critics are arguing that the case is a stunt meant to attack unions, which typically support Democratic candidates, ahead of a presidential election cycle.

On January 11, the Supreme Court is slated to hear the controversial Friedrichs vs. the California Teachers Association.

The case involves Rebecca Friedrichs, a teacher in Orange County, who alleges that a law requiring her to pay union dues violates her First Amendment rights.

Nearly two dozen states require all public employees to pay a “far share fee” for the costs unions incur by representing them, even if those employees choose not to belong to the unions.

These so-called agency-fee payers are a major source of revenue for labor unions. But some workers like Friedrichs have argued that unions have essentially become political vehicles, and her money shouldn’t go toward causes she doesn’t support.

If Friedrichs prevails in the case, the entire country could essentially become “right to work” for public employees, where they would no longer be forced to hand over any money to unions.

A decision from the Supreme Court is expected by June.