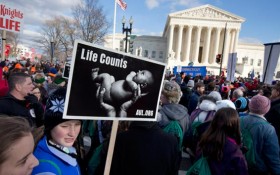 It’s the biggest abortion case in nearly a quarter of a century, and it gives the highest court in the land a chance to stand up for unborn babies.

The Supreme Court will hear arguments today on whether a Texas law that regulates abortion clinics hampers a woman’s constitutional right to obtain an abortion.

The clinics want the court to roll back regulations requiring doctors who perform abortions to have admitting privileges at nearby hospitals and forcing clinics to meet standards for outpatient or ambulatory surgical centers.

Like other states, mainly in the South, Texas says it passed the measure to protect women’s health. But it also creates regulatory hurdles that likely prevent thousands of abortions every single year.

Justice Anthony Kennedy probably holds the deciding vote on the court, which only has eight justices after the recent death of Antonin Scalia. And if he votes as expected, the Texas law will be upheld.

Should Kennedy stay with the conservative justices, a 4-4 tie would leave Texas’ law standing, because the federal appeals court in New Orleans ruled for the state. Such an outcome would allow Texas to put the regulations into full effect. The clinics say no more than about 10 facilities will remain open, where there once were more than 40 before the law was enacted in 2013, meaning thousands of abortions would be prevented.

Scalia’s death means it is likely that Texas can get no more than four votes on a court that has been starkly divided over abortion between conservatives and liberals.

If the court is evenly divided, the justices could decide to re-hear the case once a new colleague joins them. President Barack Obama says he will nominate a successor to Scalia. But Senate Republicans, backed by the party’s presidential candidates, have pledged to keep Scalia’s seat empty so that the next president can fill it.

Separately, the justices also are weighing an emergency appeal from clinics in Louisiana. The same federal appeals court has allowed that state’s admitting privileges law to take effect while a legal challenge winds its way through the courts, even after a trial judge struck it down as unconstitutional. The case is being appealed.