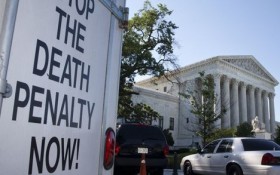 Sentencing convicted murderers and rapists to death using Florida’s unique system is unconstitutional, the U.S. Supreme Court ruled Tuesday, because it gives too much power to judges — and not enough to juries — to decide capital sentences.

The decision could trigger new sentencing appeals from some of the 390 inmates on Florida’s death row, a number second only to California. And those whose initial appeals are not yet exhausted could escape their death penalty punishment all together.

The 8-1 ruling said that the state’s sentencing procedure is flawed because juries play only an advisory role in recommending death while the judge can reach a different decision.

The court sided with Timothy Lee Hurst, who was convicted of the 1998 murder of his manager at a Popeye’s restaurant in Pensacola. A jury divided 7-5 in favor of death, but a judge imposed the sentence.

Florida’s solicitor general argued that the system was acceptable because a jury first decides if the defendant is eligible for the death penalty.

Writing for the court, Justice Sonia Sotomayor said a jury’s “mere recommendation is not enough.” She said the court was overruling previous decisions upholding the state’s sentencing process.

“The Sixth Amendment requires a jury, not a judge, to find each fact necessary to impose a sentence of death,” Sotomayor said.

The justices sent the case back to the Florida Supreme Court to determine whether the error in sentencing Hurst was harmless, or whether he should get a new sentencing hearing.

Justice Samuel Alito dissented, saying that the trial judge in Florida simply performs a reviewing function that duplicates what the jury has done.

Under Florida law, the state requires juries in capital sentencing hearings to weigh factors for and against imposing a death sentence. But the judge is not bound by those findings and can reach a different conclusion. The judge can also weigh other factors independently. So a jury could base its decision on one particular aggravating factor, but a judge could then rely on a different factor the jury never considered.

In Hurst’s case, prosecutors asked the jury to consider two aggravating factors: the murder was committed during a robbery and it was “especially heinous, atrocious or cruel.” But Florida law did not require the jury to say how it voted on each factor. Hurst’s attorney argued that it was possible only four jurors agreed with one, while three agreed with the other.

Sotomayor said Florida’s system is flawed because it allows a sentencing judge to find aggravating factors “independent of a jury’s fact-finding.”

Three of Florida’s current death row inmates were sentenced over the jury’s life recommendation. But no judge had overridden a jury recommendation in a death penalty case since 1999, according to state officials.

The Supreme Court ruled in 2002 that a defendant has the right to have a jury decide whether the circumstances of a crime warrant a sentence of death.

Florida Attorney General Pam Bondi said in an email statement Tuesday evening that the state will need to make changes to its death-sentencing statutes.

“I will work with state lawmakers this legislative session to ensure that those changes comply with the Court’s latest decision,” Bondi said. “The impact of the Court’s ruling on existing death sentences will need to be evaluated on a case-by-case basis.”

Alabama also allows judges to override a jury’s findings in death penalty sentencing hearings, but it’s not clear whether its system is affected by the case. Alabama Attorney General Luther Strange issued a statement saying the Florida ruling does not affect Alabama law.

Bryan Stevenson, director of the Alabama legal advocacy group Equal Justice Initiative, said Alabama’s system is identical to Florida’s in most respects and could be affected.