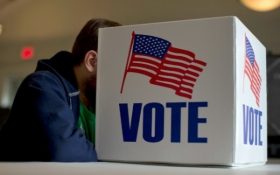 The U.S. Supreme Court on Saturday reinstated an Arizona law that makes it a felony to collect early ballots, stepping into a contentious political issue days before the presidential election and dealing a blow to Democratic get-out-the-vote efforts.

The unsigned order from the nation’s highest court overturns an appeals court decision from a day earlier that blocked the new law and drew celebration from Democrats. Groups immediately launched renewed efforts to help voters deliver their ballots to the polls, then stopped after the high-court ruling.

The Supreme Court decision called into question what happens to ballots that were legally collected from voters in the 20 hours that the law was blocked.

Arizona filed an emergency appeal hours after the 9th U.S. Circuit Court of Appeals blocked the law Friday. Justice Anthony Kennedy referred the case to the entire Supreme Court, and the court issued a brief order overturning the appeals court. The 9th Circuit will now consider the law in a January session that it set when it blocked the law.

The high court decision is unusual because it takes at least five votes to issue such an order and the court is split 4-4 along conservative-liberal lines after the death of Justice Antonin Scalia this year. That means at least one of the court’s liberals agreed to allow the law to go back into effect, and no dissents were noted in the order.

The case is one of a slew of election-related challenges filed by Democrats across the nation in the lead-up to Tuesday’s election. Democrats in six states asked federal judges to block what they alleged were voter intimidation tactics planned by Republican presidential candidate Donald Trump, his backers or the state and national GOP. A judge in Ohio issued an injunction blocking the tactics Friday, but judges in Arizona and Nevada refused to do so. Lawsuits in Michigan and Pennsylvania are awaiting hearings, while a federal judge in New Jersey refused to sanction the Republican National Committee for violating terms of a more than three-decade old agreement blocking voter intimidation there. Republicans deny the allegations.

In Arizona, Democratic efforts to extend voter registration by a day because the deadline fell on a holiday were rejected this week. And an effort to force ballots cast by voters in the wrong precinct to be counted was denied by the 9th Circuit.

Regarding ballots collected during the time the law was blocked, the Arizona Secretary of State’s office urged groups to turn them in Monday. County elections officials have said they lack authority to enforce the law and any valid ballot they receive through any means would be counted.

“All of those ballots, regardless of whether or not they were collected as a part of a lot of ballots, they were all going to be counted anyway. There was never any danger to voters,” said Matt Roberts, spokesman for Secretary of State Michele Reagan.

But state Republican Party Chairman Robert Graham said the Democratic groups should return the ballots to voters. The party has trained poll watchers to observe people who return multiple ballots and report them to election officials.

“Because now it’s up to the voter to bring it into the polling place” Graham said.

He also criticized Democrats for rushing to collect ballots knowing the Supreme Court was poised to act.

Democratic state Rep. Martin Quezada, who represents a heavily minority metro-Phoenix district, said there should be no legal liability for collecting during the window when the law was blocked. Backers of his campaign collected some ballots after the 9th Circuit ruling.

“We made a concerted effort to ensure that we documented the time when we collected these ballots, so there’s proof that we collected them during that time,” Quezada said. “Now we just have to go turn them in first thing Monday morning and we don’t expect there to be any problems with that.”

The Arizona Attorney General’s Office said it would review all elections-based complaints on a case-by-case basis and declined further comment.

Collecting early ballots is especially effective in minority communities, and Democrats alleged the law hurts minorities’ ability to vote. The last week before an election is the most critical time for their get-out-the-vote efforts, because it is too late to mail back an early ballot. They must be dropped off at an election office if they are to be counted.

Arizona has more than 3.5 million registered voters, and 2.3 million of them signed up to get a mail-in ballot. As of Friday, the Secretary of State said 1.56 million ballots have already been returned. It’s the remaining early ballots that parties target in the final week before an election.

The decision comes just days ahead of a presidential election that has Arizona Democrats hoping Hillary Clinton will win the traditionally Republican state.

Arizona’s majority Republican lawmakers approved the law earlier this year over the objection of Democrats. GOP Gov. Doug Ducey called it a common-sense effort to protect the integrity of elections and eliminate voter fraud.

A split 9th U.S. Circuit panel had said that by blocking the law it was preserving the status quo for Tuesday’s election, which could come down to the wire in Arizona as Democrats spend heavily to get out the vote from Latinos and others angered by Republican presidential candidate Donald Trump’s anti-immigrant comments.

Both parties have used ballot collection to boost turnout during elections by going door-to-door and asking voters if they have completed their mail-in ballots. Voters who have not are urged to do so, and the volunteers offer to take the ballots to election offices. Democrats, however, use it more effectively.

The law does not prevent voters’ family members or caregivers from turning in ballots.