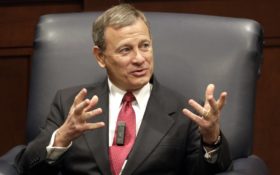 Chief Justice John Roberts is likely to play a modest role when he presides over the Senate impeachment trial of President Donald Trump, in keeping with his frequently repeated insistence that judges are not politicians.

Roberts is making the short trip from the Supreme Court to the Capitol on Thursday to be sworn in as the trial’s presiding officer, a duty that is mandated by the Constitution.

After taking an oath in which he promises to do “impartial justice” in the third presidential impeachment trial in U.S. history, he will, in turn, ask 100 senators to promise to do the same.

The country’s last prolonged look at Roberts came 14 years ago, when he told senators during his Supreme Court confirmation hearing that judges should be like baseball umpires, impartially calling balls and strikes.

“Nobody ever went to a ballgame to see the umpire,” Roberts said.

His hair grayer, the 64-year-old is moving from the camera-free, relative anonymity of the Supreme Court to the glare of television lights in the Senate. He could celebrate his 65th birthday on the Senate dais on Jan. 27.

Roberts has a ready model he can follow: Chief Justice William Rehnquist, who never became the center of attention when he presided over President Bill Clinton’s Senate trial.

It’s not as though there isn’t plenty of controversy brewing in his regular place of work. Before the end of June, the justices are expected to decide cases involving guns, abortion, subpoenas for Trump financial records, workplace protections for LGBT people and the fate of an Obama-era program that shields young immigrants from deportation. They could take up another case on President Barack Obama’s health care law before the term ends.

Roberts and his fellow Republican appointees hold a firm 5-4 conservative majority on the Supreme Court. Roberts has a solidly conservative voting record on the court, with a couple of notable exceptions that include sustaining the health care law.

Trump has been among Roberts’ critics, blasting the chief justice for his health care votes. While Roberts ignored those remarks, at least publicly, he clashed with Trump last year when the president, a Republican, lashed out at an “Obama judge” who ruled against his migrant asylum policy. Obama is a Democrat.

The high court has moved to the right with the addition of two Trump appointees, Justices Neil Gorsuch and Brett Kavanaugh, a development that has made Roberts the justice closest to its ideological center and most able to decide how far the court will move to the right, or left, in any case that otherwise divides liberals and conservatives.

Roberts’ natural inclination not to seize the spotlight will be reinforced by Senate rules that allow a majority to override any ruling. The Senate’s impeachment rules also allow Roberts to put questions to a Senate vote, without first ruling himself, which might allow him to avoid allegations of unfairness from either side.

Roberts has virtually no experience running a trial, as opposed to the appellate proceedings at the Supreme Court, and the mechanics of the trial are not yet clear. Rehnquist had his top aide at the court, James Duff, and at least one law clerk on hand. He regularly consulted with the Senate parliamentarian before announcing rulings.

Roberts runs a more flexible Supreme Court than Rehnquist, who would cut off lawyers mid-sentence when the red light came on to show their time was up.

Whenever Roberts appears in public, inside the courtroom or elsewhere, he exudes a calm confidence that comes at least in part from preparation. As a leading Supreme Court advocate earlier in his career, Roberts rehearsed so that he would be ready to answer 1,000 questions, even if he might face only 80 to 100 queries during a typical 30-minute argument, he told author Bryan Garner in an interview early in his tenure as chief justice.

Roberts also has a quick wit that he has used to settle confusing situations. When the lights dimmed and then went out during arguments in 2016, Roberts quipped: “Ï knew we should have paid that bill.”