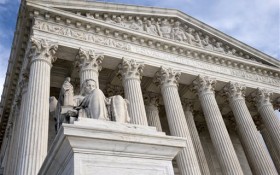 Challengers in two politically tinged cases before the Supreme Court this week face the seemingly insurmountable problem of being unable to count to five — as in five votes.

The death of Justice Antonin Scalia has deprived conservatives of a reliable vote on a range of issues, including the design of congressional districts in Virginia and the Obama administration’s effort to accommodate faith-based groups that object to paying for contraceptives as part of their health insurance plans.

In those two upcoming cases, Republican members of Congress from Virginia and the not-for-profit hospitals, colleges and charities appear unlikely to win the vote of at least one of the four liberal justices, based on the outcome of earlier, related cases.

The cases illustrate the changed environment after Scalia’s death, even before a new justice is confirmed to take his place. President Barack Obama last week nominated Merrick Garland, an appellate judge, but Senate Republicans said they would not vote on the nomination or even hold hearings.

In Monday’s arguments, former and current congressional Republicans want the court to reinstate a congressional map drawn by Virginia lawmakers.

A lower court threw out the map, concluding that lawmakers illegally packed black voters into one district to make adjacent districts safer for Republican incumbents. The dispute concerns Virginia’s 3rd Congressional District, which is the only one in the state with a majority of African-American residents. Represented by Democrat Bobby Scott, the district runs from north of Richmond to the coastal cities of Norfolk and Newport News. Its shape has been described as a “grasping claw.”

Scott’s is one of 11 congressional districts in Virginia. Republicans who controlled the state Legislature when the new map was drawn in 2012 created districts that elected eight Republicans and three Democrats. At the same time, Democrats carried Virginia in the past two presidential elections and hold both Senate seats and the governor’s office.

The lower court has since drawn a new congressional map for use in this year’s elections. Even before Scalia’s death, Republicans failed to persuade the Supreme Court to delay the use of the new map while the case is under appeal.

“That suggests a higher likelihood that it will agree with the lower court’s findings,” said Derek Muller, a Pepperdine University law professor.

On Wednesday, the court will take up an appeal from religious not-for-profit groups claiming they remain complicit in providing morally objectionable contraceptives to women covered under their health plans, despite an arrangement devised by the Obama administration that spares employers from paying for the birth control.

The groups have to notify the government so that their insurers or third-party administrators can take on the responsibility of paying for the birth control. The employer does not have to arrange the coverage or pay for it.

Among the challengers are Bishop David Zubik, head of the Catholic Diocese in Pittsburgh; the Little Sisters of the Poor, nuns who run more than two dozen nursing homes for impoverished seniors; and evangelical and Catholic colleges in Oklahoma, Pennsylvania, Texas and Washington, D.C.

Houses of worship and other religious institutions whose primary purpose is to spread the faith are exempt from the requirement in the Obama health care overhaul to offer birth control.

In 2014, the justices divided 5-4, with Scalia in the majority, to allow some “closely held” businesses with religious objections to refuse to pay for contraceptives for women. That case involved the Hobby Lobby chain of craft stores and other companies that said their rights were being violated under the 1993 Religious Freedom Restoration Act. The nonprofit groups are invoking the same law in asking that the government find a way that does not involve them or their insurers if it wishes to provide birth control to women covered by their health plans.

Nationwide, eight appeals courts have sided with the administration and one has ruled for the groups. A 4-4 outcome would leave a mess because different rules would apply in different parts of the country. The Supreme Court takes on cases to lay down nationwide rules.

Mark Rienzi, a Washington lawyer who represents the faith-based groups, said the case for the challengers is even stronger than it was in Hobby Lobby.

The health care exchanges that provide subsidized insurance for millions of Americans were not yet up and running when the Hobby Lobby case wound through the courts. Now, Rienzi said, women who want contraceptives and cannot get them from employers have an option. “There’s no reason at all that the government can’t have people get it on the exchanges,” he said.

But Dawn Johnsen, an Indiana University law professor who supports the administration in this case, said there is reason to think Justice Anthony Kennedy will join the liberal justices who dissented two years ago. Kennedy wrote separately to underscore the government’s interest in the health of women covered by employer health plans and approvingly cited the accommodation that is now being challenged.