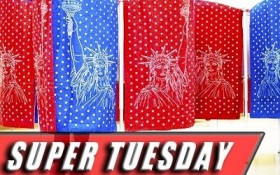 If the polling numbers turn out to be true, the long and contentious 2016 presidential primaries may be over soon. Both Republican Donald Trump and Democrat Hillary Clinton are eyeing an opportunity to pull away from their rivals in today’s Super Tuesday primaries, a delegate-rich dash across the country that could decide the party choices for the 2016 general election.

Voters from Vermont to Colorado to Alaska — and a host of states in between — were heading to polling places and caucus sites on the busiest day of the 2016 primaries.

The contests come at a turbulent moment for Republicans as they grapple with the prospect of Trump becoming the party’s nominee. Rivals Marco Rubio and Ted Cruz are engaged in a frantic effort to stop the billionaire — with Rubio in particular lobbing surprisingly personal attacks — but it was unclear whether they’d made their move too late.

Trump said his support crossed party lines and that he has even brought Democrats into the GOP.

“We’re getting people into the party that they’ve never had before,” he told ABC’s “Good Morning America” on Tuesday. “I can tell you the one person Hillary Clinton doesn’t want to run against is me.”

Like Trump, Clinton has won three of the four early voting contests, including a thrashing of rival Bernie Sanders in South Carolina on Saturday. Her victory there was due to overwhelming support from black voters, putting her in position for a strong showing in several Southern states with large African-American electorates that vote Tuesday.

Clinton has increasingly turned her attention to Trump in recent days, casting herself as a civil alternative to the insults and bullying that have consumed the Republican race.

“What we can’t let happen is the scapegoating, the flaming, the finger pointing that is going on the Republican side,” she told voters gathered in Springfield, Massachusetts. “It really undermines our fabric as a nation. So, I want to do everything I can in this campaign to set us on a different course.”

Sanders, who has energized young voters with his call for a political revolution, was seeking to stay close to Clinton in the South and pick up victories in states including Minnesota and his home state of Vermont. But Sanders faces tough questions about whether he can rally minorities that are core Democratic voters.

After he voted Tuesday in his hometown of Burlington, Vermont, Sanders told reporters that if voter turnout is high “we are going to do well. If not, we’re probably going to be struggling.”

Trump was seeking to sweep the South, which would be a massive blow for Cruz. The Texas senator, a favorite of the region’s social conservatives and evangelical Christians, expected the South to be his firewall, but now is simply hoping to emerge with a victory in his home state.

Rubio’s goal on Super Tuesday is even more modest. He’s seeking to stay competitive in the delegate count and hopes to pull off a win in his home state of Florida on March 15.

The Florida senator has cast himself as Republicans’ best chance to win in a general election and has received a flood of endorsements from GOP officials after other more mainstream candidates dropped out. But he’s failed to win a state so far, raising questions about his strategy for topping Trump.

Republicans spent months largely letting Trump go unchallenged, wrongly assuming that his populist appeal with voters would fizzle. Now party leaders are divided between those who pledge to fall in line behind Trump if he wins their party’s nomination and others who insist they can never back him.

An Associated Press survey of GOP senators and governors across the country showed just under half of respondents would not commit to backing Trump if he’s the nominee. Their reluctance foreshadowed a potentially extraordinary split in the party this fall.

“If he becomes the nominee the Democrats are going to savage him, no question about it,” GOP Utah Sen. Orrin Hatch said. His Republican colleague from Arizona, Jeff Flake, said he was “still holding out hope” that he wouldn’t have to make the choice about supporting Trump.

States holding voting contests in both parties Tuesday are Alabama, Arkansas, Georgia, Massachusetts, Minnesota, Oklahoma, Tennessee, Texas, Vermont and Virginia. Republicans vote in Alaska and Democrats in Colorado. Democrats also have a contest in American Samoa and for Democrats Abroad.