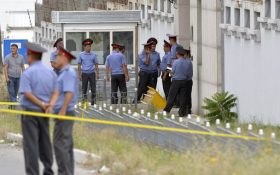 A suspected suicide bomber on Tuesday crashed a car through the entrance of the Chinese Embassy in the Kyrgyzstan capital of Bishkek, detonating a bomb that killed the attacker and wounded three embassy employees.

China denounced the attack and appealed to Kyrgyz authorities to identify and harshly punish anyone involved. No group claimed responsibility.

The Central Asian nation’s interior ministry said the person who drove the vehicle through the gate died when the bomb detonated. The three people injured are Kyrgyz nationals: two 17-year-old embassy gardeners and an unidentified woman.

Photos from the scene showed the inner courtyard of the embassy compound littered with debris. Windows of one building were smashed and the plastered walls pockmarked with shrapnel.

The embassy in Bishkek’s southern suburbs neighbors the U.S. embassy.

Kyrgyzstan, a landlocked former Soviet republic that borders China, has a predominantly Muslim population that is considered moderate in outlook.

A Kyrgyz news website, Kloop.kg, quoted Razakov as saying that he would lead a meeting Tuesday on tightening security ahead of Kyrgyz Independence Day on Wednesday and a summit of former Soviet nations in mid-September.

“China is appalled and strongly condemns the violent act,” Hua told reporters at a daily briefing.

She said China’s foreign ministry has “demanded that Kyrgyz authorities take all necessary measures to ensure the safety of Chinese institutions and personnel in Kyrgyzstan, launch a thorough investigation to find out the truth of the incident and harshly punish the perpetrators.”

Kyrgyz authorities offered no guidance on the attacker or a possible motive.

The Chinese regularly have blamed separatists and religious extremists for attacks in China’s northwest region of Xinjiang, which borders Kyrgyzstan. Al-Qaida and the Islamic State group also have threatened to attack Chinese targets in retaliation for alleged repression of Chinese Muslims, particularly those from the Turkic-speaking Uighur majority native to Xinjiang.