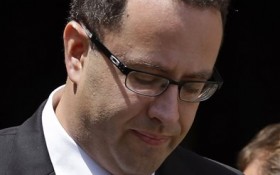 U.S. District Judge Tanya Walton Pratt was scheduled to sentence Fogle after formally accepting his plea to one count each of travelling to engage in illicit sexual conduct with a minor and distribution and receipt of child pornography.

Fogle agreed in August to plead guilty to the charges following a July raid on his suburban Indianapolis home. The resulting criminal case destroyed his career with Subway.

The 38-year-old Fogle admitted paying for sex with girls as young as 16 and receiving child pornography produced by Russell Taylor, the former executive director of The Jared Foundation, a nonprofit Fogle started to raise awareness and money to fight childhood obesity.

Authorities said Taylor secretly filmed 12 minors as they were nude, changing clothes, or engaged in other activities using hidden cameras in his Indianapolis-area residences to produce child pornography. Taylor has agreed to plead guilty to child exploitation and child pornography charges.

Prosecutors said in a sentencing memorandum filed last week that Fogle received photos or videos from Taylor of eight of those 12 youths, and that some of those images were of girls as young as 12. Fogle could have stopped Taylor from victimizing some of minors, prosecutors have said, but he instead encouraged Taylor to produce additional child pornography.

In the government’s filing, prosecutors said “Fogle has sacrificed absolutely everything he had built — including his family — to engage in sexually explicit conduct with two minors. He emboldened a molester and a producer of child pornography.”

Court documents detailing the charges against the 38-year-old father of two say that Fogle had sex at New York City hotels with two girls under age 18 — one of whom was 16 at the time — and paid them for that sex.

Fogle has agreed to pay a total of $1.4 million to his 14 victims, with each getting $100,000. He became a Subway spokesman after shedding more than 200 pounds as a college student, in part by eating the chain’s sandwiches.

Subway ended its relationship with Fogle after authorities raided his suburban Indianapolis home in July.

In their sentencing memorandum seeking a five-year prison term, Fogle’s attorneys said he “is profoundly sorry for what he has done.” They also wrote that Fogle suffers from “hypersexuality and alcohol abuse/dependence” and is committed to receiving treatment for his medical conditions.

In addition, Fogle’s attorneys stressed that he never engaged in any sexual conduct with any of Taylor’s minor victims and played no role in producing any of the images or videos recorded by Taylor.

Fogle’s attorneys said in their sentencing memorandum that Fogle’s offer to pay each victim restitution demonstrates “both the genuine remorse he feels and his commitment” to help his victims “move forward” with their lives.

As of last week, 11 of those victims had received their restitution and the three others should have arrangements in place to be paid by Fogle’s sentencing hearing, Assistant U.S. Attorney Steven DeBrota said.