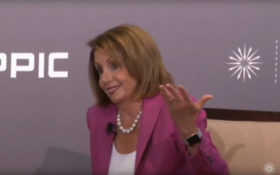 House Minority Leader Nancy Pelosi unloaded on President Donald Trump’s decision to roll back an Obama-era regulation regarding coal-fire power plants this week — and made fun of the hardworking men and women that provide our nation’s energy.

Trump’s newly unveiled policy, the Affordable Clean Energy Rule, gives states the power to decide on their own how they will restrict carbon dioxide and other greenhouse emissions.

In retaliation to the regulation-killing policy, Pelosi made a dig at blue collar worker’s financial hardship. She said that, “with all due respect to West Virginia” there won’t be anymore new coal plants being built.

Weighing in on the new guidelines for energy production, she said that she has plans to protect “God’s creation.”

“And it really is a moral issue if you believe as I do that this is God’s creation [and] we have to be good stewards of it,” Pelosi said.

“We have evangelicals and others with us — er, some, those who believe in God’s creation. So, in any case this was a big thing for us. I had to fight some Democrats,” she added.

Mocking the people of West Virginia, Pelosi said while chuckling with the audience, “Senator Byrd had a coal powered plan fueling the Capitol, you know that’s gonna go, with all due respect to West Virginia we’re not gonna have a coal power plant floating around.”

Even with Pelosi’s unnecessary dig at the state, the people of West Virginia have celebrated Trump’s new roll back of the Obama-era policy.

He added, the industry experienced the “darkest days” while former President Barack Obama was in power.

Trump has plans to allow the coal industry to thrive under his leadership — and the people of West Virginia are very pleased.

With all due respect to Nancy Pelosi, please shut up and go back to defending your illegal immigrants.