STUNNING Trump vs. Clinton impeachment fact the world MUST see - The Horn News 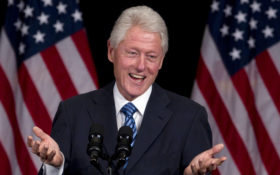 This Thanksgiving, there is one thing people of all political backgrounds can be thankful for: The Democrats’ farcical impeachment hearings aren’t on TV today.

The last time there was an impeachment, the three networks hardly bothered showing up.

The networks aired 6-times as much anti-Trump propaganda as anti-Clinton testimony.

But when Bill Clinton was being exposed as a lying sham, the networks aired only 13 hours total, according to the Media Research Council.

As usual, NBC was the most biased.

Rachel Maddow’s network aired 92 percent of the anti-Trump impeachment examinations—27.5 out of the 30 hour-long hearings.

CBS was close behind, running 84 percent of the Democrats’ anti-Trump circus but exactly half that share of the Clinton impeachment trial.

ABC came closest to being “fair and balanced”…and it still wasn’t close. ABC ran three-quarters of the Trump-bashing hearings this week, versus barely a third of the Clinton trial in 1998.

The Democrats called a handful of unknown witnesses to jabber about a president who—possibly, potentially, perhaps—delayed foreign aid to Ukraine for a couple of weeks.

One of the Democrats’ star witnesses even admitted he had nothing to testify about except his “presumption” that Trump was guilty.

The president of the United States was sued for sexually harassing Paula Jones: She said he took off his pants and exposed himself to her.

He had an affair with an intern half his age and manipulated her into lying about their relationship… until Ken Starr learned about the infamous blue dress.

Throw into the mix the fact that a few women accused the president of rape, and you had a political powderkeg.

It was lurid—and Americans followed every minute of it…at least, every minute the networks would let them see.

“We’re doing what we feel is of most interest to the majority of our audience,” said a top-ranking executive at WNBC in New York, which yanked Ken Starr off the air in mid-sentence to air an episode of trash talk queen Sally Jesse Raphael.

But this time around, fewer people have tuned in for each day of the hearings, and polls show the impeachment episode has blown up in Adam Schiff’s smirking face.

A poll that came out Tuesday found that the number of people who back impeachment hasn’t budged, “despite three days of explosive testimony,” according to Politico.

Even with the media’s biased sampling practices, the poll shows that not even half of all Americans back the impeachment hearings.

Democrats—and even Schiff himself—seem all set to back off from impeachment.

Democratic Congresswoman Brenda Lawrence, D-M.I., went on public radio to say her party should just drop the idea of impeaching the president and pass a censure motion.

“I don’t see the value in taking him out of office,” she said.

“I am a Democrat, but I am an independent United States of America citizen,” she said.

Even her fellow Democrats are losing interest in the Schiff Show. A recent poll showed five percent fewer Democrats are following impeachment “closely.”

Voters say the most important issues facing them are the economy, health care, immigration, and the environment (13%) in a new CNBC poll.

The media talking heads spoon feed their viewers irrelevant material about a president they hate, but they still can’t move the needle, even when their coverage of President Trump is 90-plus percent negative.

Getting impeached, having the entire media declare war on you, and becoming more popular?