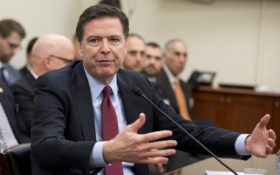 James Comey, the disgraced FBI director who was fired last year by President Donald Trump, claimed for years he was unbiased and impartial.

Now that he’s not playing political theater, though, he’s come out firmly against Trump.

So much that he is now urging voters to support Democrats in November’s midterm elections to punish the White House.

This Republican Congress has proven incapable of fulfilling the Founders’ design that “Ambition must … counteract ambition.” All who believe in this country’s values must vote for Democrats this fall. Policy differences don’t matter right now. History has its eyes on us.

Indeed, the former FBI director also recently said he no longer considers himself a Republican. Now he’s encouraging voters to join him.

So much for impartial and unbiased. With this kind of anti-Trump hysterical attitude, is there any doubt that Comey wasn’t interested in fairly investigating former Secretary of State Hillary Clinton?

Of course, that wasn’t all Comey had to say. On Monday, after Trump’s press conference with Russian dictator Vladimir Putin, Comey attacked Fox News and the cable network’s viewers.

Having sold out our nation on an international stage, Mr. Trump will now explain it all to Sean Hannity and Tucker Carlson? I’m guessing RT and Sputnick were unavailable. He owes it to our nation to sit down with a serious journalist.