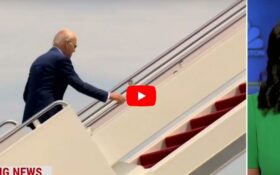 President Joe Biden headed into this week’s Summit of the Americas in Los Angeles attempting to revive his cratering polling numbers and rally an increasingly skeptical Americas behind his administration.

But Biden stumbled right from the start and nearly fell up a flight of stairs heading into Air Force One.

He suffered a similar embarrassing spill (click here to watch) in March 2021, when he tripped up the stairs three times.

Once he arrived in California, a crowd of angry far-left protesters at the Los Angeles convention center greeted the president unkindly over a range of issues: U.S. foreign policy towards communist Cuba, the looming Supreme Court ruling that is expected to overturn Roe v. Wade and allow states to ban abortion access, and other various causes.

One video from the protest went viral when a woman attempted to block Biden’s motorcade.

A secret service agent slammed the protester to the ground —

With the U.S. playing host to the gathering for the first time since 1994, Biden and his team are trying to strengthen relationships and move past the considerable political drama over which world leaders would participate.

“At this summit,” Biden said in his opening remarks Wednesday night, “we have an opportunity for us to come together around some bold ideas, ambitious actions and to demonstrate to our people the incredible power of democracies to deliver concrete benefits and make life better for everyone. Everyone.”

There could be tension when Biden meets for the first time with Bolsonaro, an ally of former President Donald Trump. Bolsonaro is running for a second term and has been casting doubt on the credibility of his country’s elections, something that has alarmed officials in Washington.

When Bolsonaro accepted an invitation to the summit, he asked that Biden not confront him over his election attacks, according to three of the Brazilian leader’s Cabinet ministers who requested anonymity to discuss the issue.

Jake Sullivan, Biden’s national security adviser, rejected the idea that Biden had agreed to any conditions for the meeting with Bolsonaro.

“There are no topics off limits in any bilateral the president does, including with President Bolsonaro,” Sullivan told reporters. He added, “I do anticipate that the president will discuss open, free, fair and transparent democratic elections.”

Biden began emphasizing the theme on Wednesday as he welcomed leaders to the summit.

“Democracy is a hallmark of our region,” he said.

The Biden administration also stumbled when inviting participants to the summit.  Mexican President Andrés Manuel López Obrador wanted the leaders of Venezuela, Cuba, and Nicaragua to be invited, but the U.S. resisted because it considers them authoritarians.

Ultimately an agreement could not be reached, and López Obrador decided not to attend. Neither did the presidents of Honduras, Guatemala, and El Salvador.

“The president was very clear that this should be a summit without exclusions,” Reina said. Still, he said the Honduran government was ready to work on common problems, saying, “The political will to work with all countries in the Americas is there.”

It’s a reminder that relations with Latin America have proved tricky for the administration even as it solidifies ties in Europe, where Russia’s invasion of Ukraine has prompted closer cooperation, and in Asia, where China’s rising influence has rattled some countries in the region.

One challenge is the unmistakable power imbalance in the hemisphere. World Bank data shows that the U.S. economy is more than 14 times the size of Brazil, the next-largest economy at the summit. The sanctions the U.S. and its allies levied against Russia are much harder in Brazil, which imports fertilizer from Russia. And trade data indicate that the region has deepening ties with China, which has also invested in the region.

This leaves the U.S. in a position of showing Latin America why a tighter relationship with Washington would be more beneficial at a time when economies are still struggling to emerge from the pandemic and rampant inflation has worsened conditions.