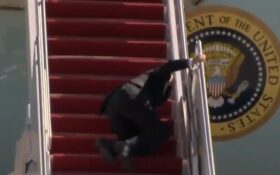 President Joe Biden suffered a potentially hazardous fall — a blunder that quickly hit the internet and had the political world asking about the president’s health.

Biden had been on his way to Atlanta to meet with Asian-American community leaders after the tragic shooting rampage that took the lives of eight people.

As he boarded Air Force One however, Biden made a crucial misstep… three missteps, to be exact.

You can watch the video below and see for yourself:

Joe Biden just fell 3 times in a row trying to go up the stairs to Air Force One pic.twitter.com/gTUTckUH32

As you can see, Biden recovers slowly just as he reaches Air Force One and turns to salute.

Biden’s administration has repeatedly denied rumors that he wasn’t mentally and physically fit to handle the job — but this public tumble didn’t help.

Critics have questioned whether Biden’s mental facilities at length, but his physical health has, at times, also come into question.

Just after winning the presidency in November, he suffered a hairline fracture in his foot while playing with one of his dogs.

That injury kept him in a cast for a handful of weeks.

Biden is not the first president to take a spill on Air Force One’s stairs.

The fall had Twitter users recalling an infamous fall by former President Gerald Ford, who also took a nasty spill of his own visiting Austria.

Social media had a field day with Biden’s fall.

But political pundits will also be keeping an eye on Biden’s health as his presidency continues. Just his week, he’s already referred to Vice President Kamala Harris as the “president,” and had an awfully hard time getting up the stairs.

He’s no spring chicken, this we know.

Could it be a matter of time before they roll him out and bring in his replacement?

Do you think Biden will last all four years?